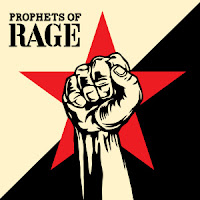 Rage Against The Machine are back! This time under the guise of Prophets Of Rage, with Zack De La Rocha sidelined and replaced by Hip Hop legends Chuck D and B Real. Ive been excited for this record ever since Download Festival where I saw them rock the stage playing plenty of Rage classics between a couple of original songs. Their debut EP "The Party's Over" released last year was not to much to rave about but enough to get the hype going and introduce to the new line up to Rage fans.

This record isn't here to throw creative surprises our way, the five are here to give us another dose of that fantastic politically charged sound Rage unleashed back in the nineties. Tom Morello's guitar work has been frozen on ice, unleashing riff after riff of those classic overdriven tones that rock hard grooves to move a crowd and plenty of his fantastic noise driven aesthetics, sounding like a scratching DJ on the decks during his solo's and fleshing out the tracks with flavorful flashy sounds.

The chemistry of the three is essential and they have no problems making it work. The bassist steps up with bright thumping grooves when Morello takes to noise, example "Fired The Shot", amazing duality at work. The loud, thudding drumming is there to turn up the intensity when the big riffs drop in and keeps things lively and moving inbetween. Chuck D is a commanding presence as the front man, his vocal style a perfect fit for the politically minded stance of the band. Alongside him B Real, as much as I love him and Cypress Hill, does sound a little off on a few tracks although he does provide a favorite moment as he lifts LL Cool J's classic flow for an anti-cop statement on "Take Me Higher". That song and "Legalize" do mark a weaker vibe on the record when toning down the traditional sound for something with a more laid back flavor, the instrumentals just don't quite excite the same way.

Its not a consistent record, you can enjoy it immensely from front to back but when it bangs its worthy of Rage's classics. "Hail To The Chief" and "Unfuck The World" simply set the bar to high for other songs on the record, the result is peaks and valleys. The political topics are as to be expected, plenty of food for thought to mull over but the real winner is in the fantastic hooks a couple of tracks drop in the choruses, packing the point into great lines to sing along to at the live shows. Classic Rage is present on this record in full force but only for a few songs.