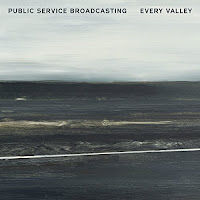 Its been a couple of years in the works but the London based trio Public Service Broadcasting are back with another unique work of interest revolved entirely around the decline of the coal mining industry of Southern Wales. The outfit bring together gleaming atmospheric Post-Rock and soft guitar grooves with subtle electronics for their own brand of calming music that straddles the lines between the forefront and background of your attention. Its a sweet spot to operate where their unique sampling of the archives of British Pathe archives creates an artistic, nostalgic and retrospective narrative for the music to revolve around. This topic couldn't of been more fitting for them.

Instrumentally the record may in some ways seem unremarkable. There is a lack of upfront immediacy or urgency in the compositions, with exception to the alarming, danger ridden "All Out" that plays like a climax of violence. Its mostly laid back, chilled out and generally a soothing experience for the listener as soft melodies and licks resonate of one another. Its in their choice of sampling and guest vocalists that the record comes to life. Under the spell of gentle, peaceful music the stage is set for deep thought as the vocal snippets of miners, union workers and community members tell the tales of their perceived wrong doing, sparking the mind into reflection. Although its focused around the mining strikes of the 80s and the industries demise in general, there is much to be taken away from the wisdom and truths that emerge, perhaps with some intentional parallels to our modern times.

A significant change in approach is the inclusion of guest singers who I suspect may have ties to the history of the coal miners, given native Welsh singing on one track. There traditional singing changes the format somewhat and the women's soft effeminate voices are far more suited for the environment and mood of the record than the males singers. Its a strange quirk but the two men just didn't seem in place with the music. The album itself starts strong with powerful themes and musical ideas however "All Out" is a turning point it never recovers from. After that fiery affair the record fizzles out as its unwinding of intensity looses its ability to captivate. The first half is fantastic however, the second seems to stretch what was initially a bright and welcoming chemistry.