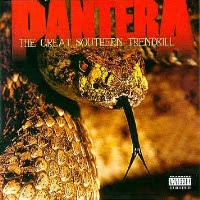 The legendary Pantera, vanguard of Metal in the nineties, continued their succession of records with the ambitiously aggressive and vicious "The Great Southern Trendkill", the bands fourth if you ignore the early Glam Metal albums. It arrives just before the storm as Phil Anselmo's erratic behavior and back pain issues would tear the band apart. He recorded his vocals separate from his bandmates, something I did not know before returning to this record. Its actually been over a decade since I last listened to it in full, my memory of it rather absent too. Diving into the trendkill again I remember every second and am genuinely mystified as to how I never saw it as a contender for the bands best record.

Where most bands often find a path to more commercially acceptable sounds over time, Pantera seem hell bent on tightening the screws and gritting their teeth with a meaner, tougher sound each album cycle, which may even fringe on Extreme Metal in moments throughout. With the production as lean as ever the Dimebag tone hits full pelt with a stunning capture of his howling guitar stance. The swell of chugging, textural crunching grooves and shrill screeching of harmonious leads resonate with a selection of tight moshable riffs, unforgettable solos and a fair helping of experimentation that births genius like the title track, a dual guitar solo leading into riptide of duality as the groove and lead meld with a flourish of harmonic scattering.

The creativity flows through his brother Vinnie, rattling out those mechanical grooves on his slick drum kit. The measured gated reverb is sublime, giving his hits a slick clean tone with a sharp punch and spacious feeling. As always the duo's chemistry plays off one another with Dime's grooves finding a perfect fit. "13 Steps To Nowhere" stands out as a particularly strong track for Vinnie where he comes to the forefront with his double bass pedal rumbling and tom rolls when the guitars cut out. The song has a dark atmosphere which is let loose as Phil iconicly screams "Thirteen Steps" over and over, leading into a demonic break down as unearthly sounds flutter by and Vinnie unleashes a deep, booming drum strike of evil and menace.

As mentioned earlier Phil recorded his vocals separate from band, something I would have never guessed and now with a closer ear I do pickup on some sections where the lyrical lines read straight from the 4/4 however his vocal input sounds as creative and involved as his band mates. Coming with a sharp, harsh, constrained scream Anselmo oozes with inspired delivery as the pain in his lyrics leap from the songs with sincerity and intensity. His struggle felt so vividly on the impacting "Suicide Note Pt.I" where the guitars drop to acoustic for a sombre moment of reality before erupting into the chaos of guitar screeching and rumbling grooves of Dimebag in part two of the song.

The brilliance of a band on the same wavelength shines strong, Phil always pushing his band mates to go harder and hard they went however It is remarkable they pulled this off given obvious tensions within the camp. Without a second of filler Pantera offer up their hardest thrashing of brutal metal to date and its all laden with southern groove, dazzling guitar work and a sprinkle of magic the culminates with one of the greatest guitar solo to grace this planet, Floods. At the thirty five minute mark this seven minute marvel carries the record to its finial phase with Dime shredding the most emotional and surreal expressions from his guitar and throwing it down to the abyssal, sludge of his whammy bar dropping riff that has Anselmo drying "die! die! die!".

The album continues on strong with another blaring riot of mean gritty riffage on "The Underground In America" and goes out with a bang on "Sandblasted Skin" which includes a fade out, minutes of silence and a brief fade in I never quite understood. All in all its Pantera finest moment, their push for a harder sound yields a lot of creativity and experimentation that comes off a charm and keeps the whole album rocking without a weak point. Sadly so their final record couldn't quite keep up with the continuous improvement in form, one can only dream what could of been, lets be thankful for the wonderful music Dime and his cronies left us!