Childish Gambino "Because The Internet" (2013) 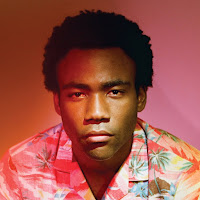 Gambino's final album Awaken, My Love was a real treat of rich, indulgent, soulful music reviving the sounds and emotions from genres mostly originating in the early decades of the last millennium. I very much enjoyed it and going back to his prior releases I was expecting the shift to Rap and Hip Hop but not the freedom and creativity this record endures. At the time I caught wind of the release was only through negative reviews and I'm wondering what on earth they heard that was so bad?

This album is warm, breezy and fun, an exploratory journey with plenty of the Soul, R&B, Psychedelia and Jazz creeping in that would blossom to become the main focus on Awaken. If there is a complaint it may be Glover's rap persona, a rather wild, fun and carefree character who jumps all over the place with topics and a wide variety of eccentric moments to disrupt the norm in his raps which come with a healthy variety of flows. Personally I find it refreshing even if its not a home run each time, Glover is expressing himself with an endearing charm and plenty of mature lyrics between his energetic outbursts.

The album warms up with the aforementioned sounds of previous decades, fusing soulful, jazzy instrumentation and samples with tight, sharp beats. As it grows, modern sounds of Dance, Synthpop and even Rave creep into some tracks for some real banging party numbers in between a flow of rather indulgent, experimental and unstructured music. From the mid to end the album struggles with pacing as many halfway tracks are littered between skits and short quirky tracks. Its mostly good artistic fun but the album suffers from a lack of direction from this point as the music falls into a whirlpool of ideas that keep jumping from one to the next before being fully realized, despite showing lots of musical chemistry and charm.

Because The Internet is a fun free for all of musical ideas and inspired creativity that's fresh, exciting but unstructured, youthful and without focus. Your opinion could swing either way and I find myself in awe of the moments where its chemistry flows and a little frustrated when it dips into the swirling of ideas that don't lead anywhere. For it to be one thing or the other would be great but caught in the middle it becomes a mixed bag of fruits that certainly yields some fantastic songs to come back to over and over again. As a listening experience its drags its feet periodically and that's a little sad as Donald Glover is clearly a very talented man but on this release its perhaps its a lack of experience that hinders it.