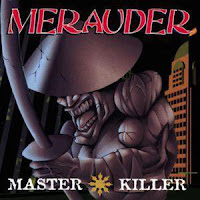 I caught wind of this mid nineties crossover classic from a documentary about the music scene and bands of that era. The second track Life Is Pain perked my ears, catching my attention and upon buying the recorded I discovered a telling track, Downfall Of Christ. It was actually decades ago I first heard this song covered on a split album between Caliban and Heaven Shall Burn. It speaks volumes to how I initally perceived this record, another fractional style of the Thrash Metal and Hardcore union that would go on to shape the sound of Metalcore bands yet to come.

Master Killer is a steady moving, thirty five minutes of personal vented anger. Its wrapped up in a continuous wave of crushing grooves and thrashy guitar chugging that mixes sensibilities from both sides of the isle but more so the metallic. Rosado has a strained shout on him, the vocals groaned with a texture swaying towards the Death Metal spectrum but with enough gusto and frustration to ground his limited range of shouts in the Hardcore feel, which the occasional muted gang shouts reinforce. Its far from charming but his energy serves his purpose at the forefront.

The instrumentals are the selling point. Pummeling drums deploy intense patterns, utilizing double pedals and driving the music forward with intent. The guitar work lays down plenty of fast picking rhythms and punchy power chords but its the groove the two together bring out that really lights up the music. The majority of these components would easily separate into Thrash. Its solo's erupt and dazzle with electric energy too but with the right approach they have aligned to extrapolate this contagious sense of bounce and groove between the lines. Its quite contagious.

This is also a dated record, its percussion rattles loosely, guitars carry a meaty amount of low end noise and takes a moment for the ears to adjust. Its a great record to point at as a key link in the formation of Metalcore but no masterpiece. Although it has no stinkers you can't help but feels these songs could of reached a little further. Song structures are simple with not a lot of reshaping moments. The whole plays like an onslaught of riffs and grooves fit to simple structures. Its fun and energizing but rarely pushes beyond itself. Still a fantastic record, I've really enjoyed it!