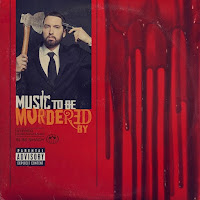 Arguably raps biggest name, Eminem, has dropped a surprise album on us to kick of the new decade! Inspired by the acclaimed horror movie maker Alfred Hitchcock's 1958 album of the same name, the shock of its release and blood soaked album cover set off a spark in my mind. I yearned for the Detroit talent to be freed of constraints and pursue an interesting concept and avenue for his rhymes. This led to a rather disappointing initial listen as Em dives straight into the fatigued back and forth with his haters on Unaccommodating, continuing to fight his insecurity of the criticism leveled his way again. Its become a tired theme souring his recent string of albums.

There is good news however. With each listen the album grows as the weak spots reveal themselves to be clustered either side a string of decent songs in the middle. The underlying themes emerge, Eminem venting his personal relationships, childhood struggles and tackling the current wave of tragic shooter events in his country. Its articulated with a finesses and attitude only he can do. His technical prowess and wordplay is a splattered mess of gaudy, goofy and genius. I find myself not sure if I should love or cringe at his puns, punch lines and words between the lines. Finding reasons to enjoy is always better than the baggage of critiquing a musical prodigy tho.

Unsurprisingly there is deep well of topicality in his lyrics to get into and its all put together with variety. His slow, steady, purposely directed words on Darkness tells a tale from the narrative of a shooter at a concert, a typically controversial Eminem track but the tone is right to get the message across to those who are open to hear it. Moments before this glum sorrowful song Em is going ham with his chops of lightning spat rhymes as he rivals his own Rap God with Godzilla, perhaps a through line in the name there. The vibes jump from fun to sad with a track switch and so does his flow, as much of the album will move from one idea to the next, Em deploys a healthy variety to engage but consistency is something to be desired.

The production initially shook me up, I didn't like a moment of it. Familiarity drew me in on the second spin, Its a constant curiosity of mine how that works. Now I'm loving it. The beats are sharp, snappy and crunky, the percussion pops and provides an aggressive framework of liveliness to compliment the energy of Eminem and his guests. They were for the most part in Em's shadow, a hard place to make an impression from. The likes of Skylar Grey could stand out when she lends her singing. Yah Yah is possibly best of the bunch, bringing on Royce Da 59, Black Thought and Q-Tip for an exceptional song throwing all the hails back to the golden era of Hip Hop.

As a whole it has its peaks but valleys too. Marsh is a self indulged spew of puns and plays on his name, not sure If I like it. Another Little Engine deploys a ridiculous chorus hook and its usually the hooks that are contentious. The sung choruses hailing back to some of his best music doesn't always land. Stepdad is a wound of a song, Em pouring is heart out but the sung chorus... again I just don't know quite how I feel about it. Overall I think Music To Be Murdered By has a lot of quality and Em gets on track with his topics for the most part. A little curation might of served it well but I think the real test is for how long will these songs stick and will I come back too it often? For now though I've enjoyed it plenty and think its a worthy release.