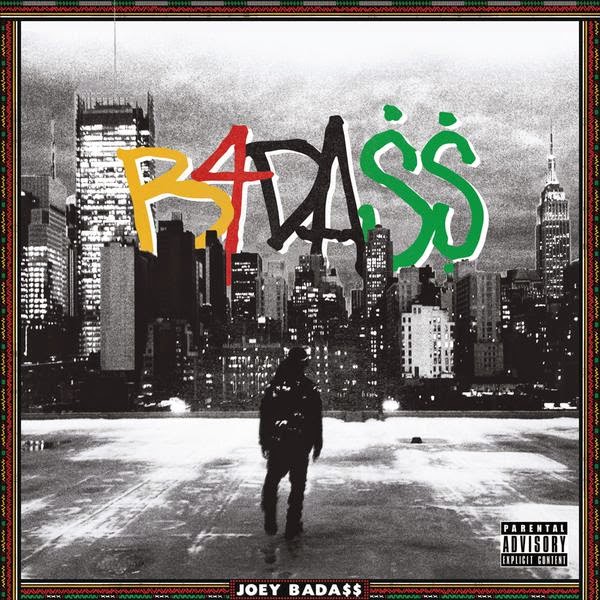 "B4.Da.$$" or Badass, is the debut record of young rapper Joey Badass from Brooklyn New York who at the age of 15 made waves with a youtube video of himself freestyling and has since been active making several mixtapes leading him to a record deal that saw this drop on his 20th birthday. Its a strong debut that feels like the 90s was frozen on ice, as if we never moved on from that classic early 90s sound, that notably happened just before his birth. Its a surprisingly mature album, musically and lyrically Joey is smart, and offers a lot of substance on this one with no cheap thrills.

Production wise, this album uses hindsight and retrospect like an art. Track to track touches on many vibes from Boom Bop to Jazz Hop, theres grittier beats reminiscent of "36 Chambers" and Gangster Rap and uplifting soulful numbers with hints of RnB and Soul influences that can be heard in the choice samples. The quality is sublime, even with a modern production value these songs could easily fool you to what decade there from without closer inspection. The best of many styles of that era are cherry picked on this record that has 15 diverse choices, giving each one a flavor reminiscent of many classic beat producers. Towards the end of the record a few modern ideals creep into the mix, keeping things fresh and offering some new ideas as well as old.

As a young rapper, Joey's got a lot going for him, but its his potential to be truly great thats exciting. Hes got a chilled flow and great pronunciation and can change up his approach, pulling the aggressive style on tracks like "No. 99". With fantastic beats Joeys presence doesn't always find itself being the show, and as I played this over and over I found that a lot of his raps accommodated, more so than dominated. The most distinctive moments I remember where lines that are reuses of Nas's "Illimatic" and Wu-Tang's "C.R.E.A.M." with "Cash ruins everything around me", theres a couple of cool hooks like the "Check my style" on "Big Dusty" but most of his raps tell a tale without the articulation to really drive a home run. He's engaging in his moment, and pleasant to listen to, but I feel he has potential to improve and with this record has set himself up for great things if he can step his game up.

Another pleasant point to bring up is the maturity he shows and choice of topics, very little flash and a lot of substance, food for thought. You can tell he gets this wisdom from his mother hes so fond of, you can hear her offering him valuable advice on "Chicken Curry" about perspective and how he will known for how he's perceived, more so than who he thinks he is. Overall I felt the production and his attitude were the highlights on a very promising debut that will have me highly anticipating his second, whenever that comes around in the future.