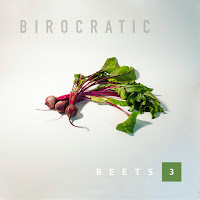 NYC based producer Biro is back again with the third installment of "Beets" and the longest yet, clocking in at thirty three minutes it delivered a better listening experience than the previous two which were a little to short for my taste. Beets 3 isn't quite the strive forward I was hoping for. The unique vocal cutting is less prominent however Biro shakes it up with new techniques and ideas too.

In general Biro lets the Jazz Hop vibe shine bright on this one, letting the jazzy pianos, classic strings and smooth samples take the lead. The tempo feels faster but the beats, sequenced or sampled, have a spice of energy to them that steers this one away from feeling like a Nujabes clone. Spliced vocals often feature buried between the layers adding to the composition which did have a feeling of depth to it the others didn't. I could play these beats over and over and pick up on little nuances each time.

Mid way into the record "Formula Fun" introduces a virtual instrument lead, a vibrant chirpy ghetto whistle like lead with a buzz-saw undertone that gives this one an urban edge. On the follow up "Favela Beat" Biro explores it further with a prominent lead that helps define a casual track into a memorable one. "Disembark" puts in an experimental lead sound, a mix between drills and bells that dispelled the chemistry with its harsh and abrupt aesthetic mixed to loud for effect.

The production was solid, however I noticed on this record more than before Biro was a little ruthless with the cuts which could be very rigid and choppy at times. Its the sort of thing you see and can't un-see. The way the samples and composition flowed wasn't the issue, its the rigid cuts that stuck out like a saw thumb on occasions. Other than that qualm this was a really enjoyable record.