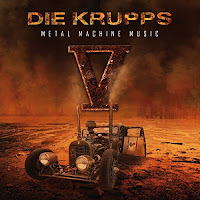 Die Krupps are a German Industrial Metal group known to some for their tribute record of five Metallica songs released in 92, and to others for their unique blend of EBM and Industrial Metal. In the 80s the group was making Electronic music Ive never given much of a listen. In the 90s they started incorporating distortion guitars and changing the mood of their sound to form a new identity which can be heard on the record "I", of which this is the fifth chapter. Despite a large sixteen year gap in their discography following the groups split and reunion, this record very much retains the identity from 97s "Paradise Now" and made for a familiar listening experience.

Metal Machine Music is a meaty grinder of a record that pounds and churns through aggressive tracks brim with attitude and aggression. Fronted with sharp, potent distortion guitars and front man Engler's shouty German accent the record conjures up a vision of post apocalyptic industrial mayhem much like the Mad Max world, exemplified by the track "Woad Rage Warriror". Serving as the backbone, deep chunky synths pound out buzz-saws and sine wave leads in front of a rather lost and muzzled baseline. They do a lot for the record as the guitar often cut out and let the electronics take lead with a grit and attitude that unifies the sound and gives it much needed flexibility that keeps the songs interesting given their rigid aesthetic that doesn't change up much through the listen. Its a great sounding record with audible instruments however the drum get a little lost and buried at times, overpowered by the guitars and synths which are so hard hitting and rhythmic oriented its almost like they are all pounding out the rhythm together. Its not a complaint but something I think actually worked really well.

Lyrically the "eyes open" anger comes across with apocalyptic end game lyrics citing capitalism's flaws with anti corporate messages, propaganda and double think musings that suit the theme well but do little to raise an eyebrow, however the song "Fly Martyrs Fly" caught my attention with risky lyrics singing from the perspective of the pilot of 4U9525 that crashed into the french alps in march. The song includes samples from TV reports and what its point is exactly I'm not sure but it makes for a good song with a catchy hook. "V" is a solid record and it was nice to get a dose of the Die Krupps sound again.