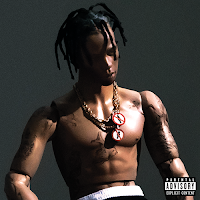 "Rodeo" is the debut full length of young Hip Hop producer Travis Scott who's named I'd not heard of before but has some hype around him being signed to Kanye's Good Music label. I decided to give this one a whirl after hearing good things and found a bi-polarizing record that gave me a lot to think about. "Rodeo" brings both the best and the worst of "Hip Hop"s almost unrecognizable current trap influenced direction, and pushes them into new territory id not heard before.

The record starts up with cold urban, spacious beats and an ethereal edge through excessive reverbs and echoing vocals. It takes a fair few songs to get to a decent rap as the balance plunges overboard in favor of style and texture. Boisterous showboating lyrics with one word rhymes bang out over and over with a lack of emotional context or any point other than enforcing attitude, wealth and excessive lifestyles. Its all about the delivery and production that treats the vocals like instruments, auto-tuning on overdrive and turning the "raps" into textural lavishes that tie tightly with the instruments and make use of many reverbs, pitch shifts and stylish distortions.

As the album develops it really comes into its own at the mid point with tracks like "Night Call", its big atmospheric nightclub sound dripping in deep base and ethereal chords buried under layers of synth, kits and echos. Its a prime example of whats great on this record, the production has an ambition and idea that's realized and reached in these dreamy "lose yourself" tracks. Despite feeling spacious and open, most the songs have many intricate noises detailing the backdrop and adding up to a bigger picture. The percussion takes a laid back roll often dropping out of focus and minimizing its roll in maintaining the pace, yet even in minimal moments its the backbone.

On one side of "Rodeo" we have unique, ethereal beats and the other a complete absence of lyrical substance. In between the two an overdose of auto-tune that tests my tolerance every time. I have to give credit through, auto-tune is not to my taste but its execution is creative and interesting at all times. This album could of been so much more to me with some rhymes and messages but instead the lyrical context and showboating tires and bores me.