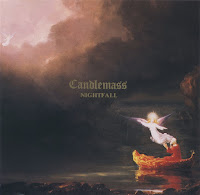 Portuguese band Desire recently sparked my interest in Doom Metal and with a little digging around and research it didn't take long to find myself in Sweden again, home to some of Metals finest bands, Bathory, Diabolical Masquerade, Entombed, Meshuggah, Opeth and Soilwork to name a few. Impressed with rave reviews throughout this bands discography I thought Id start with their highest ranked and critically acclaimed sophomore record from 87, the same decade where the term "Doom Metal" really started to take hold as a musical genre beyond its prototype days in the 70s. Quickly did I hear the echos of "Black Sabbath" who defined some key characteristics of the genre, like the slow tempo, bluesy guitars and use of the tritone.

"Nightfall" made a swift and monumental impression, after a haunting intro of ghoulish choirs Candlemass drop the guitars in with crisp, bold, solid distortions that glaze with a touch of venom in their harmonic aesthetics. Riffing with singular linear notes they fall between the groove and melody, crunching rhythms and straying into the higher regions to expand the burdening atmosphere. Without any dizzying distortions Candlemass bring a weight of doom and heavy in a storm of atmosphere that feels almost biblical in its damnation. The gloom of funeral, the shadow of death and the shame of sin swirl within these songs, however from a safe distance we are the observer. In its harmonic tone its distanced from the emotional burden and becomes quite the bewitching and devilish rock out as these slow crawling riffs tangle into memorable melodies.

The bass and guitars have a concrete harmonization for the riffs and the drums slowly shuffle around them, groaning out slow grooves that occasionally pick up tempo in short bursts. Over it all singer Messiah Marcolin makes an unforgettable impact with his voice, powerful, bold and commanding he steers the ship with a thunderous voice and stunning pitch control. Hitting bellowing lows and soaring highs he creates the air of epic with a sublime vibrato and operatic performances that flow with the rhythms steady movement. It all takes place in a stunning production for an 80s Metal record, big, spacious for the guitars to fill they rock sweetly in a rich atmosphere fit for the glorification of the macabre. It has been a pleasure to enjoy such a well realized record.