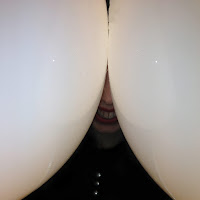 Experimental trio Death Grips from Sacramento California will always be on my radar given their mind blowing album "The Money Store" from 2012, although their recent records haven't been nearly as exciting. "Bottomless Pit" is their third release in a "disbanded" state with the band continuing to tour and make music despite announcing they had split in mid 2014. Its all part of their rebellious attitude and mysterious image, something which didn't cross over into the music this time. Even if it wasn't to my liking the band kept moving forward and taking their ideas to new reaches however this release is a pleasant and welcome return to the "No Love Deep Web" era, best heard through MC Rides delivery style and many, many electronic instruments, sounds, tones and noises straight from their 2012 releases.

The record opens up with a frenetic, abrasive track making use of swiftly looped distortion guitars and blasting drum kits rolling out rapidly with typically unusual hooks. It sets the tone for a new chapter of the bands sound, equipped with violent guitars and unfaltering tempo but by the second track the band swing into their old ways and the characteristics of their 2012 sound become very apparent both in tone and composition. From this point out any of the songs could easily be slipped into the previous records, its that remarkably similar and what fans of that era, like myself, have been dying for.

This is no complaint, just the biggest talking point of the record for me. Diving into the tracks we find refinement in the rhythmic aspects with a much tighter sense of groove being prevalent. The bands aesthetic assault of noisy, gritty synths and pressing production hit a little sharper and harder, the timing between nonsensical synth timing and drum patterns feel warped and elasticated to perfection with an almost polyrhythmic groove emerging on the relevant tracks. With tight shuffling hi hats and solid kick snare grooves the group feel far more structured with many grooves and audio assaults falling into that nod along territory fit for head banging. Its got more sensibility about its madness and perhaps that holds it back from anything unexpected or truly remarkable taking place.

The albums flows fantastically and ends with the self titled track which like the opening number shows signs of making new territory with big, dense, fuzzing guitar distortions bleeding into the surrounding instruments. Being so familiar with the band now its easy to forget how paranoid, dark and dystopian the group can sound, MC Ride reinforcing this with another round of twisted lyrics and hooks like "Ill Fuck You In Half" and "Eh" a song dedicated to apathy and disengagement. A few words jump of the page but nothing like "The Money Store", however that record has the edge of being first and completely unexpected to my ears.

It is a relatively "safe" record for such an experimental group and although I wasn't fully into their post 2012 directions I think its important for the group to not loose sight of that unpredictability as that's where their genius came from and to be fair there isn't a lot of it here, just retreading the waters and doing it exceptionally well with a tight and full on production value. Very enjoyable for an old fan but as it ages I believe not all the tracks will hold up the same way, however the others I just can't get enough of right now.