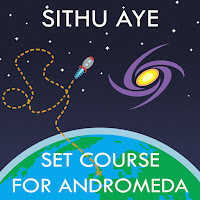 The title "Set Course For Andromeda" may play down an epic expedition with simplistic words but its the records cover art that dispels the expectations. Its simplistic font, cartoon graphic and squiggly trail spaceship don't quite match the melodic wonder awaiting inside. Sithu Aye is the one man band from Burma with an ever growing reputation within the Progressive Metal scene of the Djent variety. Four years since his last full length "Invent The Universe" its a record of two halves, the first a collection of lengthy collaborations often peaking the eight minute mark. The second a single piece of music split into six parts known as "The Andromedan". Clocking in at seventy five minutes its a lengthy listen but one that's hard to fault, there's never a dull moment and perhaps the opposite is the case, it rarely takes its foot off the gas.

Weighing the scales with deep tonal polymorphic Djent grooves and firm, vibrant, colorful acoustic guitars the rhythmic force and melodic grace are narrated by the effervescent presence of lead guitars pulling the strings of direction. This instrumental record has a voice and its the lead guitar which talks in emotional volumes with solos and intermittent leads which occasionally culminate into a trio of riffs working together. Its lavish, sublime and charming, a constant engagement and indulgence to follow. Around it there's never a moment taken for granted by the accompanying instruments, much of this marvels chemistry is found in the records first act and would indicate that a real spark of chemistry has occurred between Sithu and his guests.

Mostly this record has inspired melodies playing off of crunchy Djents, ever twisting and turning through song structures that wont stay settled. It makes for a handful of breakaway moments, using the occasional Post-Metal riff or the introduction of strings and pianos to lead the way. In some moments the Djents will drop off entirely for soft airy synths and strings to fill the void with a calmer presence. With "Spiral" Sithu and Luke Martin get Jazz, a bright, playful break of swift, racing leads on the guitar and pianos dance with one another effortlessly as we watch on, mesmerized by such a gracious, amiable wash of sweet and inviting melody.

The second half, the six part song, is on a similar wavelength but a couple of tracks have some drawn out moments of ambience and overall the intensity is lowered a little. Holding a theme together a couple of melodies return, elevated, in the later stages and the density of the compositions isn't quite as layered or lavish but maybe its the length adding a little weight to the mood. The production is solid, drum machine is tight and the instruments work so well for one another. For me, the first half is a nine and the second a seven. Well a truly impressed with this record which I will return to often!