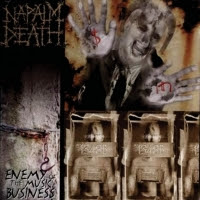 Drawn in by the short, hyper-aggressive and grooving track "Thanks For Nothing" I think Ive found what may just be my favorite Napalm Death record. With thirty years to their name and a dense catalog of records its hard to figure out whats for you in the many varying forms of Grindcore and Death Metal on display. "Enemy Of The Music Business" strikes me as the refocusing of adrenaline charged Grindcore with the better remnants of their Groove Metal records like "Diatribes". In this balancing of influences Napalm capture the pummeling style and frenetic energy with moments of groove and mosh friendly break out riffs that just works perfectly for me.

As to be expected with this band its a constant barrage of shuffling arrangements innate with aggression and anger firing out at the music industry in a time of its peak stranglehold on record sales. Barney's raging growls bark out with occasional moments of comprehension often relating to the records title. Behind him the drums rattle and rumble with intensity and snare heavy beats steer the songs into calamitous moments of blast beats and heavy pedal manipulation. They are relentless, never quieting down for pace keeping and always being and the front of an unrelenting storm. Just like the records Groove sensibilities they have moments of bounce between grinding intensity.

The song structures are best heard in the guitars and accompanying drum patterns as they quick and swiftly burn through riff after riff of dizzying power chord thrashing and brutal guitar shredding. These songs surge with an intensity from guitar work that plays with discords and tremolo picking as they continually switch and turn with every passing moment. Its a collection of loaded riffs thrown together in a maelstrom of violence that build up to short bursts of unrestrained aggression in the form of a song, usually with at least one key return to riff to hold it together.

The first half of the record throws plenty of groove and break out head banger moments into the fold and that's what makes each of these songs work for me. In the second half the mood intensifies and the blast beats, dark and snaky guitar riffs don't always surmount to a breakout moment with a few tracks. The records production is decent, its a noisy affair but the snare has bite, the kick kicks and the guitars are ripe with a sharp tone. Maybe the bass is a little buried beneath the chaos but it all comes together for the records purpose, to vent frustration, hate and aggression.