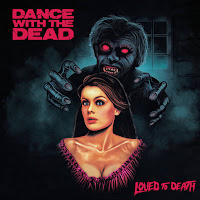 Right as I feel like I'm clued up on their sound and back catalog, Californian duo Dance With The Dead drop a brand spanking new record which I wasn't particularly in the mood for. At this point their sound is played out on a personal level. The 80s John Carpenter soundtrack nostalgia ride has been explored and so this new collection of tracks does little unexpected or even exciting at this point. The aesthetics sound unchanged if only refined and polished a fraction. Loved To Death doesn't deploy any distinct theme or spin a twist, its another ten straight tracks of dark, dense and melody rich Synthwave playing to its niche.

On occasions the music musters intrigue with some under utilized avenues, Red Moon introduces metallic rhythm guitar to the forefront for brief instances. War deploys some gargling synths that fluctuate like a Dubstep drop. Similar deep textural synths rumble on different wavelengths in bursts but beyond these brief glimpses of places for the sound to expand the music mostly sticks to its guns with the same digestible arrangements of pumping horror soundtrack boldness and neon lit nightlife adventure melodies.

When the music shows signs of something new its always limited to aesthetic and so the record drifts on by at the same pace. Its predictable, yet wonderfully executed. Hard to critique but all to palatable. I did enjoy the occasional cheesy 80s Hair Metal solo, it has a fitting place here but unfortunately none of the tracks stepped beyond what I expected of the band and so it just sounded routine and repetitive. Good music but desperately in need of a new direction.