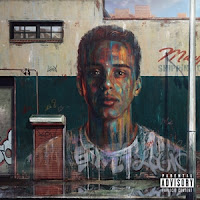 Released on the one and only Def Jam records, Maryland rapper Logic invests half a million into his breakout debut album. How do we know that? Under Pressure is a characteristically blunt, youthful set of songs with rather direct commentary from the "onboard assistant" and Logic himself who takes a raw and straight forward approach to his rhymes and story telling. At the end of the tracks the fourth wall is broken as the feminine electronic voice runs through facts and tidbits related to the albums creation, giving us an insight to the scenes and inspirations behind the music as Logic binges on Outkast, A Tribe Called Quest and Tarantino movies during its recording.

The instrumental side of the music takes on a rather traditional approach hailing back to the 90s with modern sounds far and few between. Soulful, jazzy sampling lays down warm, temperate moods and good, grounded vibes that tight, rugged beats back up with solid sequencing. These sounds and Logic's flow occasionally drifts into territory that fondly reminds me of To Pimp A Butterfly. Its got an organic quality hailing back to the pre-digital age of musicianship and that chemistry infrequently finds these illuminating grooves where it all clicks instrumentally speaking.

Its obvious that logic aims high and with his lyrics, painting a vivid introduction to himself and the city he came from. Its typically in the moment and he has no problem getting the stress and worries off his mind through the pressures of making it in the rap game. He mostly takes on a more palatable, generic flow letting the words come across with ease and oddly in moments of technical proficiency, pushing his swift snappy flows he lacks the same lyrical cohesion. It a raw, direction experience, tackling the topics head on with plainer language delivered through enjoyable lyrics.

For me the record plays without any stand-out moments. Or any duds considering the flip side. Its all feasible and achieved to a solid standard. It paints a picture without re framing anything, its sixty seven minutes can drag its feet with only a couple of features at the end to shake things up, Childish Gambino droping in, his voice a good match to bounce of Logic. Under Pressure is a fine effort, it lands where it aims and perhaps lacks a drive to go further as the chemistry here feels ripe for something special which doesn't manifest, however its a good listen.