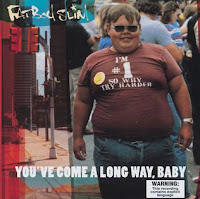 This record has been my recent obsession, revisiting one of the very first albums of my youth, a time when I started to develop an affinity for music. It was just before the massive singles Praise You and Right Here, Right Now were to take off. The latter is still a staple song at sports events over twenty years on. Norman Cook, aka Fatboy Slim broke ground with this, his sophomore record and thrust the emerging Big Beat sound onto the masses alongside acts like The Prodigy and Basement Jaxx. It's not just this record alone I've enjoyed, digging around on the genre has really scratched an itch for the break beat eccentric sound that was all to short lived.

The sound is lively, its energy grooving and this hour of music slams through stitching of samples that still feel massive all these years later. Pushing the limits, Norman's ear for beats flirts with the harsher, almost Industrial breaks. The percussion is very involved, textured and layered as the drums stack up. Its dense, heavy and a key component that plays the line well, never going to the extreme. Alongside this back bone, Norman lines the songs with obscure sampling, flourishes of electronic melody and best of all an abuse of vocal snippets on high repetition which he manipulates with a variety of effects. A subtle genre bending flows throughout as its source samples bring a range of vibes together under its power percussive persuasion.

Powering its way through its breaks, the album pivots at the end as the colorful, piano led and toned down Praise You transitions us into the final two songs. They are built up with fresh Tencho melodies on its own electronic synthesizers. The slamming beats and drum grooves still accompany but these two tracks stand out by composition as they don't pivot around a core sample, freeing the music up to more progressive structures that move through some dramatic phases and layering. Its organic, less constricted as the electronic instruments open up to more masterful manipulation.

This actually speaks to one of the records downsides, not a major issue but something that does tire after many listens. With a repetitive nature at its core, the draw backs of sampling and great chemistry can get stuck on how to add variety and progression to the music when trying to break out of the verse chorus mold. This manifests into speeding up, slowing down, a lot of tempo phasing and rapid sample repetition. Of course obnoxious snare drum riffling fires off too, that usually links back into the main beat with a little spice thrown on top. It is perhaps emerging production techniques of the time being over utilized and thus now sounding a little dated. The execution on Kalifornia however is stunning, both its build ups lead to booming amped up breaks.

All these years later its still fantastic but as an album It fails to feel like more than the sum of its parts. Its not to say there are any stinkers or songs holding it back but as an execution of the Big Beat concept, it feels very much like the best experiments have been plucked from the crop, lumped together and polished to shine. There is no doubt to the longevity of its singles however, still a common one to hear on radio and television as its woven itself into the cultural British fabric. Its a fun record that jumps all over the place with that powerful percussion holding it all together. Adoring this sound at the moment, I think I need to dive deeper into this yet another 90s sound.