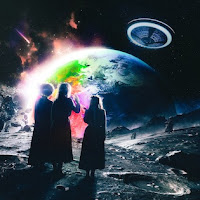 One to keep an eye on, mumble rapper Lil Uzi Vert has followed up his debut with a stylistic record of interest. Eternal Atake first caught my attention when brought into legal issues with the Heavens Gate cult the original artwork was stylized around. The new cover carries over a sense of something alien and different to throw into the Hip Hop scene but reality is, bar a handful of productions, this a pretty atypical Trap record. Its been fun, enjoyable but it doesn't feel like much here will last.

Uzi's style on the mic is a curious focal point. Deliveries and rhymes are almost tragic, seeming lazy, thoughtless and of the moment when agitated. He is however undeniably catchy and attention grabbing in a entertaining way. Its a strange tightrope he walks and I can't settle my mind, so ill default to the positive and say it works! POP is a great example where his spurious momentum of rhymes capture this driven energy that is lively and fresh yet the word of rhyme is simply one on loop in many occasion. Its got a cadence and charm yet is lyrically hollow and lacking.

This is the case for much of the record, slurred words and ridiculous rhymes come about often. Its ironic but the more focused on style over the substance Uzi is, the better his flow and energy feels, arising often in tandem with the abandoned of lyrics. When story and narrative can be comprehended its mostly a slew of braggadocios and lewd show boating. Nothing much of substance was extracted, Uzi mostly works as an expressive voice grooving and playing of the instrumentals.

Production is split into thirds, the opening of which is the most intriguing, dark and alien the samples experiment with tonality and unusual sounds that are a delight, especially when the groove clicks. The middle of the record gets fluffy and lighter with the pop appeal. Its final chapter steers closer to his previous sound and P2 rehashes his Tour Life hit. It ends on a re-imagination of a Backstreet Boys song, not particularly appealing. For me the first third of the record has merit and intrigue but it quickly fades into its own bloated runtime as the tone shifts to less curious sounds.