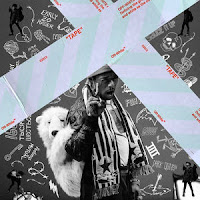 Of all the so called Mumble Rap that's peaking these days, Lil Uzi Vert has been the most interesting to catch my attention, his dazed and confused feature on the Migos song Bad & Boujee and an infectious "all my friends are dead" hook on the Xo Tour Lif3 single has had me put off this record for too long now. It's his debut album, a squeal to a mix tape of the same name and after a few years of building up steam he debuted at the top spot of American billboard charts, going on to turn platinum earlier this year.

Success aside the music is the most interesting aspect of course and Lil Uzi marks his presence as an emotional voice centered in the heart of the aesthetic. Although they call it rap, he blurs the lines, often singing infectiously with a wealth of auto tune and dreamy reverberations to abstruse his words and let the feelings flow as dissonance and "mumbling" often makes for many incoherent sentences that aids it to feeling over clarity. When in the rhymes its often simplistic, overtly repetitive and so ones attention might drift into the chemistry that's beyond the words, however when singing the record really illuminates as a plethora of memorable hooks and singing charms each of the songs.

Despite being trendy and currently "mainstream" these instrumentals come across as esoteric and dystopian, in an oddly warm and inviting way. Images of rain soaked neon light cities come to mind but that is my personal experience. Lil Uzi raps his way through heartbreak and pains on an open, emotionally lead journey that has its moments of braggadocio focused on wealth and lifestyle but mostly offers something rather different from the norm. Around him washy, deep and swooning beats create an airy atmosphere that's constantly lost in its own haze. Its indulgent, relaxing and often memorizing as exotic synths bleed with reverb over tight, contrasting trap grooves.

Each of the songs create a distinction and a few stand out. On the stripped back and gritty For Real, Lil Uzi drops back on his rap skills for a track that feels of a totally different temperament. Early 20 Rager does something similar and the flow is broken up as a couple of tracks pull away from what really works and that is Lil Uzi singing, getting into his zone and lighting up this strange and wonderful place that's emotionally honest and yet feels out of space, like a never ending drug trip.