Winterfylleth "The Hallowing Of Heirdom" (2018) 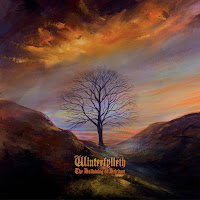 Hailing from the city of Manchester, Winterfylleth have harvested a reputation as being one of English Black Metal's more exciting bands, maybe even the UK's Metal scene in general as they have made a name for themselves, embracing the lands heritage with their music. I'm somewhat ignorant to them, having only briefly listened to some of their previous records. I thought I'd give this new one try and It was not what I was expected for they have done what many bands before have done and entirely removed all of the Metal from their sound, leaving them to explore their influences and inspirations with lush instrumentation of acoustic, cultural instruments that echo visions of eras gone by.

The Hallowing Of Heirdom is a transformative listen, its earthly, mellow choral chants underline and uplift these songs with its heathen roots as worrisome stringed instruments sing the blues and hardships of rural life. With serine acoustic guitars and an inspired composition of cultural instrumentation the atmosphere becomes vivid with the mild and moody weather of England's restless shores. Across these twelve songs we travel through different temperaments, exploring imagination as these beautiful and quaint melodies inspire visions of natural beauty and the mythic culture of simpler times ravaged by the cruelty of mother natures embrace.

The opening track The Shepherd makes a remarkable entrance as the albums most gorgeous and charming song, it is also the records most involved and "complex" as we explore this world through songs that mostly become somewhat stripped back in comparison, perhaps leaning on the acoustic guitar or singular instruments. It feels fitting of the albums vision to not always lean to the most engrossing moments where the music essentially crescendos as all the voices line up together but through the record it finds its way to these peaks a fair few times.

Although a wonderfully indulgent experience it is not without its lulls, moments where it drifts off into itself however that feels unavoidable given the select handful of instruments that make up this clear and potent sound. Initially I was in awe of its beauty but then it hit me, I have visited this pagan realm before. The Nymph sparked my memory, its composition very akin to Agalloch's The White record. Both are wonderful listens but this one stretches itself a little thin in comparison however that's no reason not to enjoy this wonderfully scenic and soulful music.