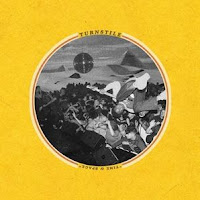 Hailing from Baltimore USA, Hardcore Punk outfit Turnstile are set to make a splash with this fantastic sophomore album released through the reputable Roadrunner Records. Despite playing in a genre that's approaching its forth decade the five piece group bring a healthy dose of youthful vitality to give every thrashing of a power chord and striking of the drum kit a sense of urgency and meaning. From the get go its a grabbing listen set to suck you in and spit you out ready to take on the world! At just twenty five minutes its a short and sweet thrashing that leaves one rejuvenated.

With a crisp, finely cut production, Turnstile's charisma is squeezed out with succulent, appetizing guitar tones, ripping with a bright, blinding distortion the lets every riffs intensity breeze by. The hard thrashing of chords, leaning into Crossover territory at times is a constant driving force but its not where the band charm, or should I say charm the most, these riffs slam hard! With keen compositions they interpolate aesthetics, disrupting and rerouting the intensity that's all to obvious with the straightforward Hardcore approach. Each song finds its moment to steer the ship in smart yet slightly unconventional directions to much avail.

On the heated, angered Generator this direction becomes obvious when the song seems set to erupt yet falls back into a shoegazing calm of aesthetic guitar effects and sampled drum loop that then swiftly jumps out into a chomping guitar riff illuminated by fantastic vocals and a swell guitar solo. For the other songs that dabble in this play with unexpected directions it is often the vocals that play a key role as the fiery shouts and screams seem a distant memory in the wake of smooth, gleaming vocal lines that rise above the instrumental. It has to be said the screams are fantastic tho, and very akin to a young Tom Araya of the legendary Slayer.

In other instances its less obvious, like the frantic piano stabbing that elevates the fast pummeling riffage of High Pressure, adding a real sharp intensity for a brief moment. It always seems like their is a quirk up the sleeve, a slightly unusual idea to give a very structured sound a sense of freedom and exploration as the songs steer themselves into exciting moments with plenty of mini guitar solos to lead you into the fun. It comes from all angles with creative drum grooves and clap sounds dropping in to abstract the norm in opportune moments too.

Space & Time is such a fun, vibrant and youthful record that is simply brimming with excitement as its aesthetic and compositions continually dazzle and erupt with aggressive energies that are steered away from dark places. Thanks to its creativity, the anger is often uplifted as brooding guitar riffs find a touch of bounce and groove, ready to steer things upwards as the songs take their usual shifts into interesting places. One thing to note, the introduction of these more melodic, warm musical voices greatly out shine the songs more routed to the norm. Fantastic record with some clear winners in the track listing!