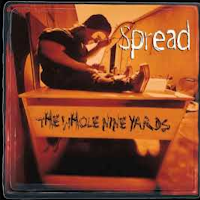 Around fifteen years ago my music archive hard drive suddenly stopped working. This was absolutely devastating for this young audiophile. It subsequently brought about the practice of frequently backing up all my data, in multiple places. I was able to recover a fair amount from the drive but sectors of it were damaged. Fortunately I could also print the entire directory list to file and at least have a record of what I'd lost... The internet has changed greatly since then. Its much easier to find niche content now. Browsing over that directory list I thought I'd have a little search and what would you know the album has been available on YouTube for two years!

The power of want and nostalgia had mystified The Whole Nine Yards as a "lost gem" in my mind. Hearing it again... how little of that is true! With so much time passed its just the one track, Sacrifice, that I can actually remember in its entire sequence. How I ever found this band in the first place is a mystery now. It is however a fun revisit to the glum moody spirits of Nu Metal, this record perfectly embodying the downtrodden, broken and frustrated tone many bands shared at the time.

As a self produced record, they clearly checked all the boxes for being picked up by a label looking to cash in on the fad. Its obvious weak point though are the vocals. The production at time deploys some reverbs to help mask the weakness but its mostly the clean takes are off key and strained, you can hear what they were aiming but it falls short. The screams and shouts can be a little tiresome too with a lack of interest in the textures they arrive with. They do all the cliche approaches with a couple of Corey Taylor shout raps thrown in the mix too.

When it comes to originality there is little. Deploying all the tropes, one can hear plenty of Korn, Coal Chamber, Godsmack and Slipknot with the echos of the Alternative Metal scene present. Mixing throttling bursts of distorted aggression, quirky guitar melodies and open wound vocal performances, little touches of DJ interludes like Limp Bizkit akin Hip Hop beats just give it everything heard elsewhere before. I probably sound harsh in my tone, despite how its aged poorly with a tired look back at the scene, The Whole Nine Yards is a pretty competent and impressive attempt to fit in with the times, forging some decent songs of that vein. If your in the mood for something depressingly indulged and aggressive then this EP has it.