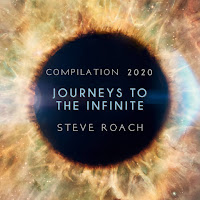 Having spent a pretty penny on records this month, the availability of a free compilation was a welcome one. Once again the itch developed for some relaxing meditative music of which Steve Roach is both a master and pioneer. With this being a collection of eight tracks all from different projects, there was much to enjoy. All were new to me, with exception to one song rehashing a keen temporal melody off Structures From Silence. With such variety on display it is hard to comment on the particulars but I found myself in awe of the apparent ease and simplicity of his unfolding compositions, which are inherently deceptive as time silently ticks by.

The songs start in timid places. Simple arrangements of atmospheric synths or modulated synths, unimposing in stature, lure one into the fold. As the master does, the music grows patiently. Layers build and a thick atmosphere engulfs one with stealth. Later into these lengthy constructs one can be in awe of the density that amounts to such deep and spiritual insights. With eighty two minutes of finely crafted, temporal, meditative ambience peering into the mind, its easy to get lost in this record.

With such a plethora of music produced and continuing to create, it can be daunting to know where to go with his catalogue but it seems the musician has a constitute quality to his output. Maybe this compilation will serve as a jumping on point to another album as I find myself keenly curious by the soundscapes he forges. I particularly liked Skeleton Passage with its Tangerine Dream vibes and also the subtle world music ques akin to another classic Dreamtime Return on two of the songs. Fine music!