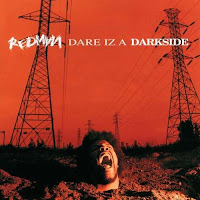 Reggie Nobel, or Redman as he's known, is an American rapper who I was introduced to through his acting career, noticeably his lead in "How High" with Method Man of the Wu-Tang Clan. Although familiar with his hits, It occurred to me Ive never really given a record of his a proper listen. Noticing the album covers inspiration from Parliament's "Maggot Brain" I thought why not this one? Very quickly I found myself deciphering the albums chemistry and quirks while enjoying the bombastic, braggadocios battle rap style of Redman who track after track reaffirms his substance with an array of humors lines, crafty lyricism and hyped delivery.

Not long into my first listen it became very apparent this is the rapper who Craig Mack emulated his style from. When Mack dropped this flavor it felt rather lack luster and tame in spots, but Redman has the style in the balance, although too many spins it can get a little tiring which is understandable considering ninety percent of the content is about self affirming his flow and lyrical format. Its fun, playful and Redman is full of energy, spitting tight rhymes with a grooving flow that continually bounces off the energy of the instrumentals. He's light on his toes, throwing punch after punch, left hook, right hook, throwing forth the rhymes like a boxer. In between the steadier verses Redman brings the hype with some effective techniques, double tracking the rhyme words, using echos, reverbs and on occasions a love/hate pitch shifted Chipmunk like voice that's unmissable for its blunt presence.

Behind his voice a unique instrumental style plays, underwhelming in immediacy but genuinely grooving and unique for its loose feel. There can be much chaos between layers of samples and a lack of continuity gives the sound its mark. Sometimes the samples will clash a little and underneath most tracks on the record a deep baseline rocks out to its own accord. Its an unusual chemistry that gives itself a lot of leeway and flexibility and ultimately sounds atmospherically bombastic with a touch of boom bam in there too. Defining for Redman's style and a solid record with little to criticize, however apart from a couple of preferred tracks, like "Rockafella" sampling Snoop Doggy Dogg, there's no surprises or ground breaking raps, its a safe album that sticks with what works.