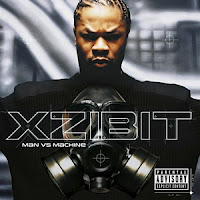 Following up on the mixed bag that was Restless, Xzibit brings a surprising amount of coherence to his forth album. Man VS Machine has a similar tone and entourage with Dr. Dre, Snoop and Eminem returning among others, as well as new collaborates DJ Premier and M.O.P. Kicking off with a typical self affirming braggadocio track, the substance then starts with Release Date, a tale of being released from jail and building a mentality for the transition. Its a moment where his rhymes grab your attention and handle a narrative. It happens rather frequently on the albums journey.

Man VS Machine is not without its tarnish, some features feel routine, a few stale overproduced beats and a couple of trashy raunchy songs in the mix but this streak of substance in X's rhymes stand out. He is still firmly rough and tough on the mic, his delivery hard and concise with a firm flow, typical X but between his hard hitting lines, socially conscious leaning verses pack some weight, food for thought in the mix. Its far from profound but as the tracks play these moments frequently pop up.

Heart Of Man remixes Toto's Africa, which might sound like a recipe for disaster and although X is a little harsh for the mood, it somehow serves as a highlight on the record, a rather uplifting track with a solid message of taking life seriously and putting in hard work to who you are and your ambitions. He reflects on his journey and how others and fallen behind, the way of expressing his work ethic is refreshing. It stands out against the overall tone, a lot of spiffing clean virtual instrument beats with enough variety and experimentation to provide something for everyone.

My Name is a fantastic tune, Eminem lends his voice and production for another track that could slip into his own discography. Nate Dogg's voice in the chorus hook really pulls together the vibe of the era. The inclusion of Eddie Griffin on a skit, akin to one on 2001, once again really expands this sounds universe. I was so fond of in my youth, much fun to discover more of it. Going into this I wasn't expecting much giving the historical response but their is plenty here to dig. With a little trim removing some of the fluff tracks it would be one solid record!