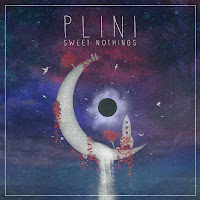 Arriving at the second of three we find "Sweet Nothings" a four track, seventeen minute release that would be my favorite, however the choice is made difficult by "The End Of Everything" and its fan favorite, the eight minute epic "Paper Moon". "Sweet Nothing" feels like the bands most fluid flowing and settled sounding release. Each track has a flavor, a stylistic focus. The second track "Tarred & Feathered" introduces a Latin, Spanish guitar, played fast with metal techniques similar to Animals As Leaders and there "The Joy Of Motion" release. "Away" does a similar "metal on acoustic" with fast melodic picking rhythms and hammer ons. There's a fantastic break down riff in it that replaces the atypical metallic crushing guitars with heavy bass groove and accented melodics through low acoustic notes. Its only the last track that plugs in the distortion tone for some chord driven Metal.

The opening tracks indulges us with subtle serine strings queuing the acoustics that pluck chords note by note in short repetitions and with a swift shift the tone changes and tranquil pianos take over, between them brief solos tease whats coming as the atmosphere of a warm moonlit night sets in. At the end we are treated to a guest guitar solo from Gru who produced one of my favorite Progressive Metal records "Cosmogenesis". Its nice to know he is still playing, would love to hear a new record from the talented guitarist.

Plini's sound is versatile but always lush, feeling dense with a wash of color and charm that can go in many directions. Its in the subtlety and ambience that the magic is brewed, the stirring of moods for his dynamic and inspired guitar shredding to take the stage. Although it takes much of the focus its the underlying strings, pianos and other instruments that set the perfect tone. The drumming also sounded a lot more settled and alive in this recording, again using a drum machine they rarely sounded like one, if at all. I will continue enjoying these records, perhaps listening to them back to back as an album, awaiting his first full length which I am very excited for now!