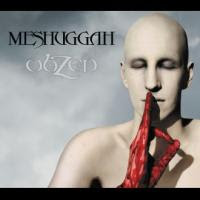 Pioneers of Djent, the Swedish Extreme Metal act Meshuggah found their crowning moment with 2005's "Catch 33" and bar the "Nothing Remake" their follow up "obZen" may have just reached technical ecstasy on the abrasive front. It and "Catch 33" are the bands best critically received records and in 2008 the band were at a peak of popularity and exposure that was just perfect for this, their sixth full length. At the time I wasn't terribly keen on it, It felt like they were retreading the Nothing / Chaosphere era after a big progressive shift. And that may just be true, in a way its a step back in time but executing old ideas to new extremes with a clinically brutal production aesthetic and crafting even more elasticated, neck snapping grooves out of odd time signatures and extreme musicianship.

The texture, tone and timing of these instruments is paramount to its brilliance. Here we will hear the precise firing of instruments through polyrhythms lapped against the 4/4 at fast and brittle speeds. This includes the mind numbing pedal performance by drummer Tomas Haake who plays a unfeasible fast poly groove on "Bleed". The guitar tone is typical devoid of color but brimming with metallic intensity as its texture squeezes into every crevice of audio space. The clarity is stunning and with the drums neatly fitted in around them Jens monotone screams glide over the top of a menacing and punishing sound to assault the listener with the bands unrivaled grooving nature.

Its rhythmic nature feels primal and infectious as one is compelled to bang along in a confused state induced by polymetered bliss as elasticated momentum propels back and forth in unequal measures. What "obZen" has that makes it so much more enjoyable as a record is variety. Each song seems to distinctly offer up a different flavour of chaos. "Combustion" opens the record with an acoustic riff to quickly transition us into inferno as fifty seconds later the snare is crashing down over a thunderous groove. "Electric Red" slows the temp down forging a dark atmosphere with drawn out discords. "Bleed" is the album's show off track, dragging us through riff after riff of mind melting precision of guitar picking and drum pedals. "Lethargica" is the mammoth track with lengthy bar spanning grooves leading to an almighty, unforgettable "heavier than hell" riff in the middle that will tears your ears off.

Past this point each track again offers up a different flavor, the band experiment with speed, tempo and chords. "Pravus" rattles away on the snare with unforgiving guitar riffs that push the abrasion to extremes before transiting to some swift technical grooves. Its unrelenting and that is the charm, "obZen" never lets up, the band execute their most sticking ideas at full tilt. Truly brilliant moment for the band, however I don't think it tops their more experimental and progressive "Catch 33".