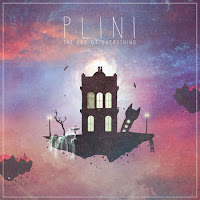 My introduction to Australian Guitarist Plini was via Sithu Aye who featured Plini on the "Invent The Universe" record. The pair have also released a four track split record, which I have yet to listen to. Although a one man band, Plini is a touring act too and so far has released a string of singles and three short EPs of which "The End Of Everything" is the latest. The band are currently touring as well as recording their full length debut, which after enjoying this I am looking forward too.

Much like Sithu, Plini is part of this post-Djent Progressive Metal scene and of a much more melodic persuasion and Jazz orientation. Every rush of energy and djenty grooves give way to lush soundscapes of instrumental subtleties, gracious lead guitars and dreamy synths. It can heat up somewhat with double pedal drums, chunky, metallic riffs but even in its heavier moments the sense of brightness and color that courses through never fades. The result is a very organic record that will shift gears without notice, one moment illuminated by the fire and the next acoustic guitars are playing lullabies over soft synths accompanied by lively Jazz percussion that dances around the kit softly. As an instrumental band Plini's dynamic guitar leads are the voice, forever an alluring force of adventure. No moment here drifts from the path and as a three track its only flaw is its length, clocking in at seventeen minutes it leaves much to be desired! I can't help but feel their debut could be something special.