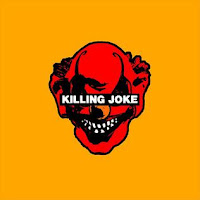 One of our first musical journeys of old is that of Killing Joke, which remains unfinished having gotten a little tiring wading through their lengthy and varied discography. The group split after Democracy and then seven years later reunited for this second self titled record which resembles some of the excellence displayed on the most recent Pylon. I was aware of its legend, having brought Dave Grohl of Nirvana onboard to play drums. The two bands historically had a record label dispute over the resemblance of Come As You Are to Eighties. If I remember the story, that have Dave actually discovered Killing Joke, becoming a big fan and offering his services here.

This second self titled offering is a concise construct of crunching distortion guitars and battering drums led by front man Jaz Coleman's commanding presences. He shapes the musics angular, aggressive tone to fit his dystopian mold of political corruption and corporate influence leading us down a path of total control. Practically every song reaches into this topicality, criticizing institutional powers and delving into paranoid, conspiratorial takes on world events. A lot of it is agreeable and some steps a little beyond my own personal acceptance but as an artistic expression the instrumentals illuminate his stance.  Much of it has aged well but a few over reaching tracks like Implant inferring control through DNA and micro chip insertion sound outlandish. Then again we all walk around with personal portable tracking devices in our pockets and most people whimsically send of blood samples to data broker firms in the guise of learning about heritage as well as health.

This theme is one I engage with, it gets me thinking where lyrics are not usually not a key focal point for me, It was nice to have that dimension bring challenge. The instrumentals behind them vary song to song but are for the most part excellent. Blood On Your Hands out stands out as an exemplary song. Brooding Industrial drives of hypnotic force erupts into cyclical intensity as high lead guitar noise wails over looping bass lines. Its the typical affair, big slabs of crunchy sound droning in repetition with verse chorus shifts between riffs. Lots of meaty palm mute chugging rhythms counterpart to expansive guitar constructs that pivot from the mechanical drive into atmospheric plunges. Its pretty much the best of what this band have done over the years rolled up into a new package. Not entirely persuasive if not in the right mood but certainly an impressive comeback record!