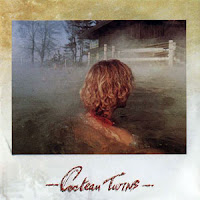 Before the Cocteau Twins sophomore record, arrives another, ultimately disappointing, three track EP. Released in April of 1983, it captures a moment of creative poverty where the music fails to venture upon anything of remark. Reading up on its creation, the group were forced to work with an outside producer while also feeling that their creative efforts were not up to scratch. It shows just about everywhere. The record has a drab, dry tone where its instruments feel lone and separate. The baselines rumble in repetition with a tone that feels distant from the hazy guitars. They reside in a narrow, chromatic space, dull and meandering. The hypnotic wash of pedal effects and reverb offer up little depth or texture unlike before.

Its fractions from being right but these small differences in feeling turn the songs into dull drones. The title track has some merit as layers of creepy synths and loose, shaky pianos add some much needed depth. The drum machine too is lacking in arrangement variety. The tone is dull and grinding, lacking natural echo and creativity that got it by on Garlands. In front of it all Fraser sings with a routine, that distance between instruments amplify a sore tiredness in her performance. As the band have described it themselves, its not a good record but it should be said the title track holds up okay. Its Laugh Lines and Hazel that offer little musically, further exposed by this drab production style. Disappointing but not a representation of whats to come.