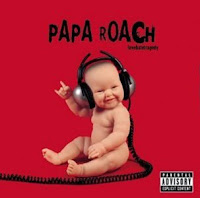 My recent dive into the past with Infest had me thinking on their followup record Lovehatetragedy, a very Emo oriented title perhaps signifying a coming departure from Nu Metal that would follow this record. It occurred to me that upon release I devoured this album but had left it in the dust, never listening to it again once that period in life had passed. So today I thought I'd give it another spin, see what I remember, possibly enjoy and how its aged over the last two decades.

Kicking off with M-80, high adrenaline guitars rip through some exciting riffs, the theme of musical love amps up the energy, setting quite the upbeat tone for this record. Sadly it is short lived, Life Is A Bullet spins next and it starts flooding back. Lovehatetragedy is a slug of self indulged misery. Song after song has Shaddix spewing his particular craft of self defeating sorrow that glorifies all suffering in a moment without resolve. To find him some merit, its catchy writing, his choruses have a knack to them, cheesy ear worms I'm glad I had once forgotten. This is painful.

The band behind him bring back a very similar aesthetic. The approach to songwriting is as before, the rhythm guitars tend to pivot away from syncopation and metallic groove, with more hazy, melodic tinged chord arrangements creeping in. It plays into their emotional angle, which has become simply unbearable for me to endure. Its more cast iron Nu Metal with an emphasis on the lonely, moody wallowing tone that often accompanies the worst of the genres tropes.

The record starts reasonably well, a few pre-Infest songs re-recorded bolster its aggression but as it drones on the songs get drearier in tone or quite possibly my tolerance is being challenged, ending with a string of awful tracks. Its been amusing to hear how many lyrics and choruses come back to mind from memory, pretty much all of it. The depressing nature is just to much to bare. I found myself skipping a few tracks halfway, wishing the torture to end! I am a big believer in finding reasons to love music but record is too wrapped up in awful memories and its clear that Shaddix's words don't offer much in the way of help to someone in this dark space.