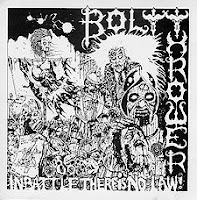 I was looking for some contrast in Bolt Thrower's sound and I've certainly found here on In Battle There Is No Law. It is the groups debut record, a primitive affair of early Death Metal muscle and Grindcore grit. Yet to find its coming Military theming, it does have the rare moment of tempered groove resembling the likes of Mercenary and beyond. This is no half step away though, they are an entirely different band at this point. Given the name, I expected to find Power Metal at their roots but alas we have something more akin to Napalm Death at that era in time.
Its a muddy, messy assault of extremity borrowing ideas from Thrash in lead guitar solos and Punk in the rhythm section but mostly its steeped in an the early Death Metal sound. The production is dire as many records of this age were. Record producers had yet to figure out how to handle those riotous blast beats and so the drumming blurs technical fretboard thrashings into a discernible mess. The spirit gets through tho, the music often rigidly shifting in tone between its melodies, guitar thrashings and "plunges" of Grindcore battering that feels like the least exciting aspect as its pivots lack a sense of progression. The songwriting just feels without direction, sections stitched together and barked over by the monstrous growl of Karl Willets.
Its a typically hard to enjoy album for me, Its dated ideas bloom in the ugly, drab aesthetic and the whole thing lacks a charm or spirit you might occasionally find here. Even in company of other extreme records from this era its ideas just sound stale. To give them some credit they did record with John Peel beforehand, often a sign of greatness but on this one I don't hear the appeal and the evolution to come isn't obvious either. If I had started with this record, the journey would of ended here too.
Rating: 4/10
Email ThisBlogThis!Share to TwitterShare to FacebookShare to Pinterest
Labels: 1988, 4/10, Bolt Thrower, Death Metal, England, Grindcore
Newer Post Older Post Home