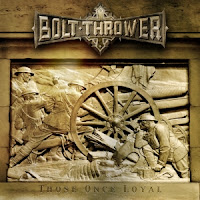 Last years musical discoveries list included that of English outfit Bolt Thrower, a band held in high regard among the Metal community. It was perhaps the lack of distinction between the two records I checked out that dissuaded me from perusing more. From first listen to present, Those Once Loyal makes itself known with the same imposing stature of strong armed Death Metal leaning on groove and mid-tempo thrashings more so than aesthetic extremity. Its a brutal, tough affair that comes through with plenty of hard melody between its axe grinding. Pretty much everything heard before.

This is no criticism, as their eighth and final album the group have mastered their own sound, delivering with nine tightly performed power rides of channeled aggression and chunky, crunchy grooves. Having now understood their formula it was immediately digestible as their rhythm guitar riffs lead with competence. The fall of hammering drums and the flat guttural shouts of Karl Willets slip neatly into place around them. Each track comes with a similar pacing, rotating riffs in straight forward song structures that hold together a fun and punishing intensity that rolls on wards.

Bar a couple keen melodies and particular riffs, its forty minutes barely detour from the format, leaving little in the way of surprise or difference from my memory of the other records. Its fun, enjoyable, perfect for its own appetite but not a head turner. What they do is excellent but doesn't quite stir my highest regards and therefor after a couple of spins feels a little redundant in the ways of finding something new. I think I will check out their debut next in the hopes of hearing some progression in Bolt Throwers historical sound. Great record but very much more of the same.