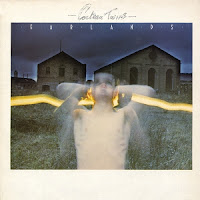 New year, new journey. To kick of 2021 I have picked out the Cocteau Twins, a band who's legacy on Ethereal music is well known to me, they are a huge influence on one of my favorite groups Autumns Grey Solace. I'm dead keen on two of the Scottish Trio's albums but Ive never dived much deeper and that's what we will now undertake.

Starting with their dreary, cold and haunting debut Garlands, released late in 1982 on 4AD Records, they ride a wave of Post-Punk bands exploring new territory and at this stage show glimmers of whats to come. Its of the era, bold upfront baselines permeate the music with solid drives of rhythm and marching tune as wails of effect soaked guitar noise create this eerie ambience of atmosphere, pale and bleak yet densely textured from its narrow confines within the mix. Screeching chords and disjointed melodies play with a grainy quality. The fretwork loops back on itself, panning in stereo, circulating ideas without progression. The music plods on in a consistently depressing manor, monochromatic like the unending grey skies of rainfall.

It was not as I expected, I actually found its temperament most comparable to Lycia's classic Cold. It too being a shivering and dark sombre affair of nightly ambiguity and unease. Yet of course the attraction to all this is the smothering mood of dreary music that can conjure the imagination of darker meditative places. Garlands never relentless from that dreary yet oddly relaxing tone. Its best releases from the tension come with the occasional baseline or lead guitar that wanders off to a warmer state of being but only ever for a brief moment before being pulled back to the norm.

The counterbalance is singer Elizabeth Fraser. Soon to evolve into the acts crowning jewel, at this point she is still finding her voice with a somewhat timid performance that is equal too the murky tone. Soft and shy in stature and performance, she is often matched by the instrumental power but her grace is felt often with beautifully sung words and reoccurring vibrato inflection at the end of her sentences. It may be mostly in the mix as her voice does tend to bleed into the guitars with the baselines still prowling proud, unhindered as they march forever forward with a firm stride.

This is a fascinating record, for its songs tend to feel like singular ideas whirling in repetition. It is dazzling in a curious ability to lure one into its stormy arms. Despite being buddy and murky its production aids the concept well with the drum machines competently keeping pace as its reverberated snare strikes frequently with a cutting harshness occasionally thrown to pitch shifting echos. The only drawback is Fraser's vocals, they sound underutilized an quiet, knowing she will hit spectacular heights with records to come. A truly dark and spooky starting point for a band that will bring much glamour and beauty to this spellbound flavor of darkness.