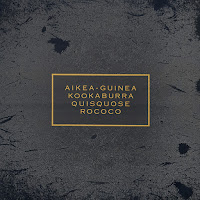 Its another EP from the Cocteau Twins but this time the four songs are of notable intrigue! Perhaps it is the title track and lead single that is the least impressive! Its temperament is rather adjacent to Treasure, with brightly polished bass lines plucking at a steady pace and a drum machine dressed up to be more convincing, the swells of emotional sound from Guthrie's noisy guitar and airy synths are peaked by the melodies of sparkling bells yet it is Frasier who doesn't find the charm. Her vocals toy with the wordless dynamic, drifting up to circle the high ranges but miss the mark.
With a similar temperament on the following Kookaburra, it is Guthrie's shrill guitar grinding, dissipating into atmospheric swoons over the warm piano chords and keen bass lines that sell the magic. Quisquose pivots to a strong piano led march, brought to life by luscious acoustic guitars painting a darkly mood. Its the instrumentation that shapes up to be the endearing quality of these songs, the compositions generally repetitive and shifting between complimenting arrangements back and forth.
It seems to be a reoccurring theme that Fraiser's normally enthralling performances just don't land on these EPs. The final and bwat song is the short Rocco, an instrumental it would be hard to picture a voice in. The textural mystery of Guthrie's guitar noises get pinned by these bold, upfront base notes marching hard. The interchange between the two provides tension and then relief for the magic. The song doesn't progress anywhere much from its main idea but the chemistry is its charm. This is definitely a better set of b-sides. As always they lack that finishing touch.