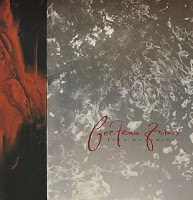 This four track record, named Tiny Dynamine, is the first of a double EP release by the Cocteau Twins. Essentially, it could of been the groups forth album but due to internal dissatisfaction, it was cut in half and released quietly through the shorter format. A reoccurring theme in these songs that failed to make the cut, is Fraiser, who often fails to find the magic that makes it to the likes of Treasure or Sunburst And Snowblind. This time however there are sparks and notably no failed endeavors.

What stands apart is Guthrie's compositions. The luscious and lavish reveb soaked acoustics are elevated in fidelity and tone, starting to unpick the lock on this magic. Instrumental piece Ribbed And Veined goes to a whole new realm as its chemistry with the soft and airy synths pinned beneath slip into a nightly indulgence. In this moment I can barely tell both the aesthetic and melody apart from Autumn's Grey Solace. Perhaps it is this era that is their biggest inspiration.

It and the opening song are worthy of much attention. The remaining two are foggy tracks, where the punching power of crisp instruments is muted in their unresolved focus. On both it seems as if clarity never lands on any set instrument or voice. The result is moody atmospheres that pass by without a hook or lure to bring one into the music and set it alight. With another four songs to get too, it does already seem pretty clear why this double release decision was made.