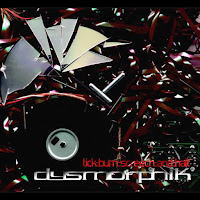 To write of Dysmorphik is to tease a treasure lost to the Internet's youth, years before the current perceived permanence of data. I discovered this Industrial musician through online communes, an early form of social media where artists where talking direct and giving their music away for free through MP3 sharing websites long dead. I had a collection of about twenty tracks obtained in my youth and a few years back managed to contact the man himself. He graciously sent me the missing songs from the only two albums before vanishing into a puff of smoke, with all traces of his peculiar art disappearing online, possibly forever! Many of these songs have been burned into my mind, occupying a strange space no other artist can get close to. Its survived the years, stitched to my painful youth and growth out from that darkness.

Tick, Burn, Screech & Halt is an amateurish debut, a wonderful cascade of obtuse noises, smashed and molded into an broken heap of sound. In that wreckage, something spectacular lurks. Its dystopian, alien and difficult. As far as Industrial music goes, this has many of the common hallmarks, yet the end result feels oddly different. A downtrodden voice broods between the cracks of melodies, rhythms and slabs of sound crammed together with force. These songs are an ugly mess birthed from beautiful intentions of expression. In that is a magic not often heard.

Most these tracks consist of several layers. Rattling, gritty and stiff percussive grooves get wedged between slabs of Industrial noise distortion. Airy synths lurk in the distance, softly groaning with unease, shaping a mood. Around them a calamity of stabbing synths, wobbling basslines, strikes and crashes prod and poke into the mix with a mechanical madness. The voicing that get sliced in are often of that whispering, shadowy variety. When reaching to hold a note its charm is solely in the attempt.

So much of this music feels machine like, disjointed, disconnected and strange but through the awkward cohesion certain instruments emanate the intention. Through its friction and unease the music pours out a vision that takes some time to hear. When I was young I lapped up having something odd and interesting to listen to for free. Then missing songs decades later, it took far longer to fall for them. With time they shape up into odd hashes of vision and aesthetic that dominates its own peculiar space.
Sometimes it is obvious which instruments are pushing the narrative but in its better songs your never quite sure. Giving ones attention to the barrage of noises, brimming with subtle zaps and whirls in its arsenal of synths, you can get lost in the detail. The colliding sounds and friction rub all over each other and yet through that spurious mess something enigmatic, dark and curious washes over with a spell. Much of this praise, however, should be reserved for the following release. That is where things get exceptional. At this stage the amateurish execution shows its nature and influences, reaching back to Synth-Pop in certain moments too. It is still a wonderful mess, unlike anything else Ive heard since.
Rating: 7/10
Email ThisBlogThis!Share to TwitterShare to FacebookShare to Pinterest
Labels: 1999, 7/10, Dysmorphik, EBM, Electro-Industrial, Industrial, Noise, USA
Newer Post Older Post Home