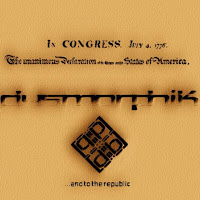 Following up on yesterdays post about Tick, Burn, Screech & Halt we have the second installment by this wonderfully peculiar musician of personal interest to me. Released five years later, ...And To The Republic is a force of musical maturity. The bizarre machination of Industrial noise harps on with refined execution. Along with a developed approach to songwriting and structure, these inspirations have evolved with passion, vision and agility. Its often through the lens of Dance and Electronic Body Music, along with a better mastery of composition and sound design.

Where his previous songs where disjointed, awkward and unusual, Dysmorphik channels the wall of noises with a newly found cohesion that is dense and engulfing. Between slabs of synth and protruding electronic melodies, distortions, zaps, whirls, fuzzes and clicks rattle around in a persuasive madness. Everything hits harder. The percussion slams with drive and groove, hitting these dance floor strides of pace fit for a Cyber Goth club. The key melodies, emerging from alien saw waves and trance-like synths, are catchy and grooving. Even the vocals have "leved up". Still leaning on the whispering edge of softly aggression, a use of subtle distortion and plugin effects deliver a far better front, now powerful and melded to the mix like another instrument.

The sound design is fantastic! Giving the density your attention, its details offer up so much more to these massive songs. Its less obvious as to what is going on, as if hours of experimental sound manipulation has its its best recorded moments plucked out and injected into the music like a Bomb Squad production. This lends the song structures to more break away moments, much like the sudden shift of break-beats, the music derails on brief tangents of magical noise madness, often driven by slamming percussion that thuds and crunches hard. Its a dystopian pleasure!

It would be so hard to pluck a favorite from all these numbers but Idle Dereliction has this wonderful progression as a song. Starting off with a dense pummeling of Industrial groove from its drum patterns, the flexing baseline hooks one in as the tapestry of noises grows. Hard hitting synths force the issue and before long the dense arrangements shift towards an emotional axis. It wrestles back and forth with these fantastically performed lyrics pushing of from the "make love like suicide" line. The wall of sound is utterly engrossing, beautifully alien and its steady deconstruction reveals this underpinning of choral voices... its so dark and wonderful.

There are more songs in the arsenal beyond this release. A couple of experiments in pure Noise and Gabber style electronic music seemed like a fascinating evolution, a sort of boiled down experiment, the tapestry of gritty noise without the songs worked around them. Whatever the reason this musician had to end it all here around in the mid naughties is a mystery. It sounded like they were on the cusp of another evolution yet what they have left behind has memorized me to this day. Dysmorphik holds a special place in my heart. It is not with every song they strike gold but when it works its unlike anything else out there. Truly a forgotten treasure.