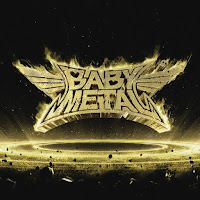 Right now Babymetal are enjoying a wave of hype as they tour America, gaining the attention of somewhat mainstream audiences. The trio of idol girls and their backing metallic band have been at it for six years now, when they were as young as just twelve years old. When their debut album dropped in 2014 I was initially dismissive of the group, seeing them as a product, a pop act. Leading up to this release the single "The One" captivated by attention with its exciting guitar leads and soaring spirit which felt like a continual climax of epic. Even its its calmer moments a gorgeous piano and gittery synth play off each other with charm. Like a slap in the face it made me realize that behind the idol recruitment was a genuine band with inspired musical ideas.

So "Metal Resistance" has been an exciting listen. A combination of heavily over produced modern Metal and warm heated J-Pop hooks made for what has been a refreshing and welcome twist on heavy music. Being an outsider to J-Pop I couldn't comment much on its influence to their sound but the Japanese voices of the trio and conventional sensibility in delivery works in equilibrium with an aggressive underflow of aggressive guitars drenched in trance like synthesizers. Like any fusion of this type you can expect the guitars to drop to power chords in vocal led moments and although they do this, the band keep up a furious intensity with brutal, relentless drumming. Musically speaking they go through the motions with Groove Metal riffs, guitar solos and electronic instruments including lurking synthesizers in most tracks and on "Awdama Fever", a song about bubblegum, a visceral, glitchy, breakcore rhythm section uses the classic amen loop sample which much energy.

The music is crammed into the sound waves and frequencies with a very modern, overproduced squeaky clean and alarmingly assaulting mix. The compression is real. The kicks and snares are very sharp and sudden yet quite masterfully mixed alongside the other instruments. The guitars are super loud and even the girl's vocals loose their softness with competing compression. Its a very frontal and loud sound however it works 100%. Nothing but credit to the production, it takes the sterile and clean to its limits and packs a lot of character into the sound, which is often what it removes in my experience with this production style. Even after back to back listens you think it might tire you ear drums, but no!

Their were two other things I particularly enjoyed. Su-metal's voice sounds fantastic in both Japanese and English but the pronunciation of English words and the foreign emphasis is charming. The guitar leads and solos in their melodic phases gave me fond memories of Nobuo Uematsu's approach. With all this praise I must say much of my excitement emanates from "The One" which I simply cannot get enough of. Its not all fantastic, a few songs are a little mediocre in comparison but all do there own thing and make for a bright, colorful and refreshing record.