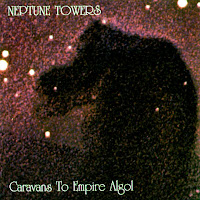 This record had the makings of something great, a mysterious album cover, the promise of dark and eerie ambient music. Side project of Norwegian Darkthone musician Fenriz, at the bands creative peak and released on Moonfog Productions. Unfortunately the music didn't quite live up to what one might expect but nothing appalling is in store, rather a mediocre ambience piece that does enough to define itself with a touch of memorable atmosphere that it can call its own.

An organic horn like noise confronts us as it morphs into a deep wall of fuzzy noise. Perilous to any tune or melody it shifts and transforms through bizarre and claustrophobic sounds packing sharp wave forms into a narrow range of frequency. Eventually a deep plodding melody creeps into the forefront to find itself quickly replaced by roaring noises and sweeping hisses. This continual metamorphosis resembles organs at one moment before our baseline returns to be replaced by a fluttery, swirling, heaving growth of sound around the twelve minute mark. At the sixteenth minute the rapid fluctuations make an uncanny zap lazer sound, dispelling the ambience with its lack of subtlety. The second track starts by falling to a black, unnerving atmosphere with low, creepy, rumbling distortions, soft and hidden in the tracks reverb. The rest mostly experiments with cascading sounds often feel as if they are descending, being sucked down into the darkness before ending with some rather paranoid sounds.

Its a strange and unusual experience, reminding me fondly of old black and white sci-fi horror movies with its stark and and adventurous use of primitive technology. I now find myself fascinated as to how this record was composed, in many moments the turning of knobs and dials can be felt but many of the tones and sounds created are quite mysterious and do not lend themselves to be understood. The process behind its creation could well be remarkable as its ambiguity serves to be its strength. Great listen but I didn't experience much that warranted my return after a few listens.