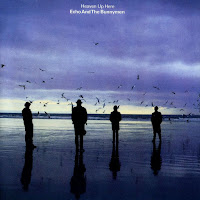 Checking out records on NME's great 500 albums list "Heaven Up Here" caught my attention for its Post-Punk label, an era that's been capturing my attention recently. The group formed in Liverpool during the late 70s and have had a string of successful, well received records of which this is their sophomore, considered their best work by many. Not a band place to start and immediately Ian McCulloch's vocal style caught my attention, reminding me of The Smiths and The Doors, maybe a little Joy Division too.

He would serve as the focal point of the magic this record exudes. Delivered with a immediate power and swift force his voice graciously glides with the gulf of its vibrato opening up a vulnerable state. And boy does it gulf, the wobble is real and swollen with emotion. Its no opera or theater piece, Ian sings with a soothing tone but as the songs build there are moments where he lets it go and every heart felt note chokes me up, the oscillation in tandem with its meaning. A remarkable singing style nearing perfection, if such a thing exists.

Behind him carefully orchestrated atmospheres play off his direction, building and descending at his command using simple constructs of repetitive sections with plenty of variety and change to illuminate entire songs. The drums punch and crash their way through with a rigid sense of groove, sharp and fast in rhythm with plenty of roomy toms in the spacier moments. Alongside them the bass plays a welcome upfront roll, often taking the roll of "the riff" to lead the way forward with warm and structured lines that rock back and forth. The guitars shimmer and waver in the air with light chord strumming and wide reverbs to build a spacious atmospheres on top of the rhythmic core.

As a whole the eleven tracks add up to quite the experience, rich with ideas and never finding itself in a dull moment however the climatic nature of "A Promise" with its warm melodic tone and heart wrenching performance finds the rest of the songs chasing behind this mark. Its the sort of record that lets the time breeze by with its effortless ask of the listener. Ian's voice certainly steals the show but it may not be the same with a different set of instrumentals, the group have quite the chemistry and artistic unity with their music.

Favorite Tracks: With A Hip, A Promise, All I Want
Rating: 8/10
Email ThisBlogThis!Share to TwitterShare to FacebookShare to Pinterest
Labels: 1981, 8/10, Echo And The Bunnymen, England, Post-Punk, Rock
Newer Post Older Post Home