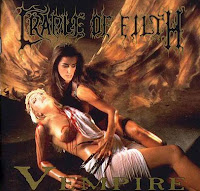 "V Empire", or "Dark Faerytales In Phallustein" was once to me a somewhat mysterious release from the English Extreme Metal band. A record with two names, sometimes listed as an EP and released instead of a "lost" record. Luckily now the Internet is a wealth of knowledge and the story is clear. Before their debut, which I am actually not familiar with, they recorded a full length known as "Goetia" in 93. Unfortunately the record label couldn't pay the studio bills and the recordings were wiped. Hastily signing with Cacophonous Records the group got a bad deal which led them to quickly write and record "V Empire" before jumping ship to Music for Nations. Recorded in 95 and released earlier in the year to their magnum opus "Dusk... And Her Embrace", it has only six tracks, but with a couple of lengthy tracks makes for an album experience.

Despite its rushed production Vempire, as its often referred to, has some of the bands finest moments, the opening three tracks a staple mark of any live show. Its a rawer experience with a lack of polish that translates into a wild energy that becomes refined and focused on its follow up. Its very much in the same moment, however Dani's unique and shrill howls are at their peak with a blinding intensity and haunting magnitude. Alongside them his deep, bellowing gothic spoken words, drenched in reverb fuel the fantasy worlds these songs take us too. In some of his most intense moments he sounds like Varg Vikerness and his animistic barks of agony. The rawer attitude of this record gives the extreme angle of their sound more freedom and the result is a faster, aggressive beast. The melodies and riffs create a vivid atmosphere and make for their most memorable material, especially the ten minute epic "Queen Of Winter, Throned", full of dramatic intensity, mood shifts and lightning screams its topped off with an almost cheesy moment of vampiric masturbation leading into the songs climax and conclusion.

Having revisited this one Ive really got a fuller sense of where it lies in Cradle's history and subsequently has become a fascination and curiosity. What could this have been under different circumstances? It feels like Cradle rushed their most inspired moment. In the flurry of a dash to escape a contract they managed to find a brilliant balance in production of rawness and power that would never be the same again. If this was strengthened by a few more decent tracks it could of easily been their ten out of ten. Fantastic record!