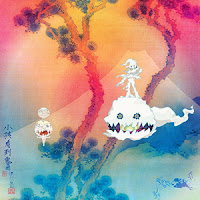 This release is another in the so called "Wyoming sessions", its twenty something minutes spread across seven tracks, just like other Kanye produced records Nasir and Ye. This project has West collaborating with Kid Cudi under the Kids See Ghosts moniker and it kicks off with a fiery opener that sets a new president for gun play in Hip Hop music. A violent instrumental of sharp percussive strikes firing like gunshots rallying away, forming a groove as vocalizations of gun sounds take on a new form, they are sung and turned into a melody. Its over the top, theatrical and clever but not quite to my taste however the rest of the music takes on a much calmer vibes that have faint echos of psychedelia.

Kanye's instrumentals are on point, each track forges an atmosphere fit for the tone of his raps and Kid Cudi's halfway talking that's flat and toneless in delivery, sounds good when he softens it down into halfway singing on the self titled track. As per usual most the lyrics pass me by but Kanye drops in with a striking verse on Cudi Montage that has him painting the raw emotional reactions and forming their relevance to his wife's recent work with the president to get a pardon for false imprisonment.

Its really the underlying music that made this short record enjoyable for me. Getting to the core of his beats, they often sound minimal and stripped back, but the sounds they focus on do all the work to make these songs come to life with quite a few tie-ins between the verses to give it a lot of life. The singing and use of voices to spruce up tracks as so often is a treat and a mark of his style. It all comes together well and makes sense of the shorter run time, there are two others to come from this collection of records produced in his Wyoming studio and I'm quite excited to hear them after this one!