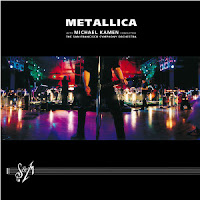 With S&M2 out and on my playlist, I wanted to relive again this remarkable collaboration between Metallica and the San Fransisco Orchestra. My impression of it today comes with more appreciation than ever. How has this record not become a yearly ritual. Between the Metallica binges, it would bring a whole new dimension to their arsenal of classic songs. More so, I think its the newly found adoration of what the band attempted with Load and Reload that lifts a fair portion of the record from depths I once skimmed over.
Symphonic Metal and the like may have been in relative infancy but to this late 90s period its no stranger. However the collaboration doesn't even resemble how strings and orchestra instruments had been paired with Metal music to date. The San Fransisco group orchestrate on their own terms, acting as another layer of musical identity with in songs already brimming with stature. The music is embellished, a real treat for those who appreciate a union of style often perceived of opposite despite many emotional similarities.
The album's opening is brilliant, Ecstasy Of Gold followed by the instrumental Call Of Ktulu gives ample time to take in the added dimension before ripping pace with Master Of Puppets, possibly the best way for James to bring his iconic voice in. From there the record ebbs and flows with refreshing changes of pace and also involvement from the orchestra, not every song and moment requires a layering of symphony and it too breathes with the set list. One thing to say, there is no fear in getting right in the weeds of some of the bands most iconic music.
There are many favorites each listener will find, among them a couple originals, Human and the adored No Leaf Clover, two fantastic songs, the last before St. Anger. No foreshadowing there. S&M is not without its flaws though. The seventeen minute passageway of Wherever I May Roam and Outlaw Torn drags its feet a little with the plodding repetitive baseline reminding me of a festival jam session giving the crowd ample time to take a trip to the bar and refuel on booze before the closing hits.
Being one to continuously move forward with music, a few nostalgic trips to old records have had me worried of magics left behind. I knew S&M stood in great stature among fans and myself, not so much critics at the time. Listening to it again, its almost as if I forgot about the endearing sparkle the whole experience has, especially the goosebumps educing enthusiasm from the crowd who James lets sing on the record with him. Must of been one heck of an unforgettable experience to have been there!
Rating: 8/10
Email ThisBlogThis!Share to TwitterShare to FacebookShare to Pinterest
Labels: 1999, 9/10, Classical, Heavy Metal, Metal, Metallica, Orchestral, Symphonic, Symphonic Metal, Thrash Metal, USA
Newer Post Older Post Home