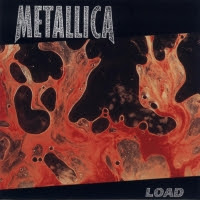 After the monumental success of the self titled "Black Album", the legendary Metallica took five years to find an artistic stride to new territory. Despite them selling multi-platinum copies and bringing hordes of new fans to the Heavy Metal culture, their back to back Load and Reload records have been the mockery of metalhead snobs from then till now. The sad reality is I was once one of them. Thankfully my journey of music discovery has led me to a place where I want to hear what the artist is about and not just what I think will satisfy my taste buds.

Metallica were right there at the formation of my passion for music, my first and still favorite record of theirs, Ride The Lightning, carved my passion for this music and being a young teen with Christmas on the horizon I had a chance to scoop up more. Visiting the local record shop I was captivated by the covers of Load & Reload and picked them as my next Metallica records, so imagine my disappointment not to hear more of that fast, dark and sleek Thrash Metal! Unfortunately that sour first experience and the rarity of encountering fans that liked these records solidified my opinion that they were garbage... I owe a big thanks to the "That's Not Metal" podcast for prodding back to these records, their epic ten hour talk covering every inch of history in detail and heaped praise on this period of the bands history. With the fire stoked again for this band Load has been on heavy rotation and with mature ears I can join them in their praise of a truly excellent musical period for the band.

Where the old guard may moan that the Thrash roots are gone, Metallica have moved on, evolving into a mature beast that channels the energy of old into hefty, momentous grooves and power throttling drives of weighty riffage that erupts among a band expanding their horizons. Broadening their pallet, the four horseman let the sounds of Blues, Country and Hard Rock accent the guitar tones, steady the pace to a strut and shift the "heavy" to the grooving backbone as their new expressions become a focal point. Songs like "Ain't My Bitch", "2X4" and "Wasting My Hate" stick to their guns but the rest of the record flourishes with the new pallet.

Hetfield has to be given major props for his performance on this record. If the riffs weren't hard, thick and jiving enough, his vocal performance soars on many moments of the record with fantastic harmonious deliveries that will have you singing along. His mannerisms, the "ooh"s and "yeah"s reach a new level of infectious attitude and enthusiasm for his art which just pours out on this record, most likely due to turning inwards for inspiration. The social, political commentaries of past are void, with practically every track carrying an introspective edge in his words. Like with the range of energy these songs carry, James matches it with endearing performances, like the emotional, ranged, Country power ballad "Mama Said" to the grit and gusto of the grisly "Poor Twisted Me".

At nearly eighty minutes the album is loaded, mind the pun, by a band producing gold that might of needed some refinement, one or two less favorable songs trimmed, some unnecessary length on tracks too but the reality is the atmosphere and drive Load has keeps its excitement from start to end. Maybe this lost treasure trove from one of my favorite bands is just too much for me at the moment as I haven't wanted to skip by a second of this yet. I think the variety the record offers has much to say, flexing chunky heavy grooves between diversions into Blues and Country let the songs wind into different territories all while maintaining the grit of the biker gang persona that resonates. Free spirit on the road man.

Production wise, we have an authentic aesthetic. You can feel the heat, sweat and sand of dusty winds and hot climates. Lars's drum kit is snappy, sharp and piercing, every strike is heard and his patterns are as always a strong fitting for Hetfield. Kirk and Jason sound somewhat underutilized, his fifteen years in the band leading to a criminal lack of creative input that finds most of the baselines backing the guitar with a warm, thick mirroring in the base that provides a meaty thud when James gets into the heavier riffs. Kirk's solo's haven't left much of a mark on me, his roll is heard emphasizing the accent and tone Metallica are coming from but his leads never overtook the expressions of Hetfield who drives everything forward with his riffs and singing.

If I were to be critical of anything it could never be the artwork, the change in image the band undertook. Metallica aimed to reinvent themselves and that's exactly what musicians should do when it calls for it. Retrospectively I can see how turning the axis on whats of expected of Metal music is so important for the genre to evolve and perhaps their choices here have had unfounded influences on the shape of modern Metal. Its quite the shame that none of these songs grace the live show anymore. This is a fantastic period for the band, evolving their artistic expression and hitting the mark in the process. Now to binge on Reload!