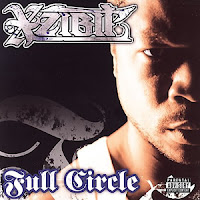 It feels like its time to close the lid on this fun dive into the Xzibit's records. It seems notable that the West Coast rapper just doesn't have the production on his side. Similar to Weapons Of Mass Destruction, Full Circle feels defined by its unremarkable production. Mediocrity is tiring and X's rock steady flow and arsenal of rhymes doesn't carry the music far enough. Topically its not as sharp and socially oriented as before. The stance affirming braggadocio vibes don't really pop with these combinations of rhyme and beats. Flipping between quirky sampling and safe glossy beats the songs roll on in a drone without a hook or feature to carry it anywhere special at all.

Experimenting with a pitched down voice and slower flow X inhabits the mind of a corrupt cop to shift perspectives on Ram Part Division. Its a moment that stands out purely for being somewhat different in a sea of mediocrity. Although X dives into a few topics of importance through the runtime, they generally have little impact with both his word play and food for thought seeming dulled in the shadow of his former, sharper self. Struggling for words to further my thoughts, I'll end on the note that It feels so run of the mill, without thought direction or ambition to define what the record is as a whole. It has therefore become just a collection of not so interesting songs.