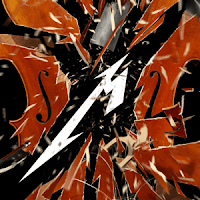 Twenty years on from their now iconic S&M performance with The San Fransisco, the two reunite for an experience both recreating the original and throwing in some new elements with underwhelming takes on Classical Music and of course an inclusion of new material from Hardwired and Death Magnetic. Although it is impossible not to enjoy a Metallica set list, this project feels inferior, cast to the shadows of its former glory with some flaws present throughout that just let you know the original was a magnitude better. Ironically it is this release the press seemed to have gotten onboard with, heaping on praise where the first one was often misunderstood.
As the band age so do their performances and all too often can you hear Lars struggling to keep pace, Kirk's solo's become a little scattered and sloppy and James too struggles with his voice infrequently. At the live show, its hardly an issue given the immersion and event but taken to wax, its all too noticeable. What is also very apparent is the often meager and timid nature of the symphony. Its either the mixing or composition but these numbers feel far more like a Metal songs with some added sparkle. I wasn't keeping tabs on if the symphonies were identical for songs that were featured again but overall it just felt quiet and less involved than before.
That being said one delight to behind where the new songs. They sounded fantastic! After a couple of years its proven they fit in alongside Metallica's many hits and the symphonic gloss worked ever so well, even if just a complimentary element. S&M2 is hardly a bad experience but it really doesn't offer anything more bar the newer songs. There was also an opertunity to take the two Classical songs and spice them up with some Metal but the one track they did this on was simply a disappointment. Its hardly surprising that retreading old footsteps hasn't yielded anything special here.
Rating: 5/10
Email ThisBlogThis!Share to TwitterShare to FacebookShare to Pinterest
Labels: 2020, 5/10, Classical, Heavy Metal, Metal, Metallica, Orchestral, Symphonic, Symphonic Metal, Thrash Metal, USA
Newer Post Older Post Home