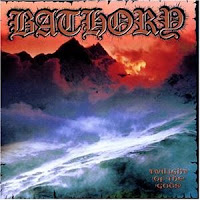 Twilight Of The Gods represents some truly new territory as a part of my nostalgic journey. Bar a couple songs, most of the record was fresh and thus had a challenge in the face of all the praise I heaped on Hammerheart. Its temperament is similar, more of this heathen viking Metal but with a duller edge. Its title track and Song Of Blood have a gloomy tone. They make up twenty one minutes of the record as the pair steady the ship for slower tempos. It shifts focus from guitar to its choral voices that conjure rural life of this inspired era of history. In a few rare moments of gusto, the guitars feel held back by the production which doesn't give them enough punch. Its very much an atmospheric affair and that gloomy feel does subside in parts but mostly these two have a burdensome vibe that drags on.

That temperament is felt throughout, however the middle tracks get to embellish their themes and stories with rocking riffs and choruses that bring some much needed excitement. The tone is dominating though, even Quorthon's excited explosions of lead guitar seem dulled. If its composition or production, I can't get away from this moody tinge, its almost indulging but mostly for me lurches in the shadows of the mythic, heritage charged music that came before it. This time around the vision of culture lost to time is distinct but lacking an enticing energy.

Blood And Iron gets a nod for its stunning glossy acoustic guitars that ring out metallic chords. Its a gorgeous compliment to the driving song beneath, breathing much needed colour into the icy, cold and stiff production that I'll say again feels a fraction away from being an endearing quality. The album ends on a high though, the Hammerheart song an anthemic out poor of triumphant singing that works in some of Gustav Holst's timeless music from The Planets. Its an epic conclusion to an otherwise disappointing record that is a little to self indulged in its droning tone and off-key singing, which again feels a fraction away from something great in its pursuit of authenticity. The bellowing call of the hard life of vikings resonates with that same hardship. A flawed record which has Its moments, I am doubtful it will grow on me.