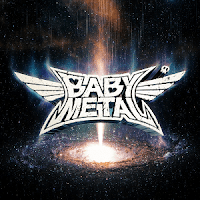 My anticipation for this record was soured somewhat by lead single Pa Pa Ya. Its a tad obnoxious and overt but that's one of this acts charms, to dial its elements up! I still think its the weaker track but it has grown on me. The rest of this new record was a total hit from the get go. Da Da Dance blasts the listening experience into the stratosphere with its electrifying guitar taping illuminating the jolting synths and cutesy "Babymetal" chant. What a tone setter for a fun record that does what these musicians do best, bringing ferocious modern Metal together with sugar coated Pop in quirky memorable fusions. This time around a hint of worldly sounds creep onto a couple of songs, expanding the bands horizons, delivering another fine chapter in the journey.

Something about the way this record rolls out, a couple of its themes too, give a sense of arcade and adventure. Its almost as if each song has a linage with a video game. Each one I could envision a music video related to the arcade, perhaps the "don't give up, game over or continue" lyrics sunk in a little to deep. Every track arrives with a different spice, only Kagerou sounds like a leftover cut from Metal Resistance. Shine also echos of The One but mostly its new and bold territory for the band while retaining their distinctive musical identity and high octane production.

Japaneses exclusive tracks BBAB and BXMXC are wonderfully obnoxious in polar opposite ways. The first has its glossy Pop Metal charm and the latter an exercise in sheer rhythmic grooving on overdrive! Shanti and Oh Majini stand out with exotic cultural sounds, the latter dipping toes into Pirate Metal with bagpipes and rugged sailor chanting. Their is a noticeable growing presence of the backing musicians joining in vocally. "Kitsune Of Metal God" gets an entire track of demonic chants through its descending, eerie and tribal atmosphere on In The Name Of.

Its jam packed with variety and amazing hooks to get stuck in your mind. More voices may enter the fold but again its Suzuka Nakamoto who's voice soaks in the limelight, elevating every moment she is present. I particularly loved the songs where she gets to sing in a poppier context. It feels like this record has pushed its boundaries as the heavy side feels equally embellished. Maybe the drumming didn't ramp up the intensity with blast beats and the like but the Djent guitar tones are masterfully dense an tonal, bordering on guttural for comparison. Perhaps the meatiest Ive heard yet!

Much like their other two records, gems and numbers that don't stick as much make the sum of its parts. This time around the variety carries it and plays solidly with an arsenal of new songs. It has been a pleasure to indulge with and a reminder of why this band are so exciting. Anything is possible in Metal and these directions and avenues are so much more interesting that other bands grinding out the same old recycled styles. Babymetal's freshness is a real strength! It's hard to say if they have reached a peak but each record gives my that feeling they could reach higher peaks!