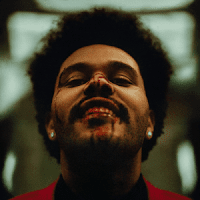 When a name crops up frequently in mainstream culture its often a red flag for me, however a readers recommendation had me curious. Being introduced to the heavily 80s inspired Synthwave leaning tracks first, I picked up this new release a bit too hastily. As my first record with the Canadian artist, the popular appeal is obvious. Ice chilled vibes, smooth glossy production and silky singing makes for easy listening.

After Hours hinges heavily on 80s Synthpop and classic R&B, fusing them with modern production tones to create an almost spacey night life drive under neon lights. Beats are postulated with the pace, craft and groove of that era. Its liquid synths ooze dense atmospheres into life. Even the songwriting and melodies mirror its nostalgic inspiration with similar structures, tropes and arrangements. The track In Your Eye's exemplifies this with its classy and almost cheesy Saxaphone solos.

I can tolerate and enjoy these tracks immensely. Where the record losses me is its sways into laid back R&B. Abel deploys his voice with a high pitched softness that just rubs me wrong. Its all to vulnerable yet self assured for me to extract anything of value from the overtly care free lyricism. Its only about half the runtime that dives into this avenue of unwound indulgence but I struggle with it. Not my cup of tea i guess!

For the side I did enjoy, the lack of originality beyond a keen reassembling of ideas heard from decades gone by made the experience a little shallow. One can appreciate the gorgeous atmosphere and slick warmness of the music but its lacking in musical surprises given how closely it sticks to classic pop tropes. The production is a marvel and his voice a seductive one, in the right refrain of course. Its been an enjoyable bunch of spins but I personally don't buy into the hype on this record.